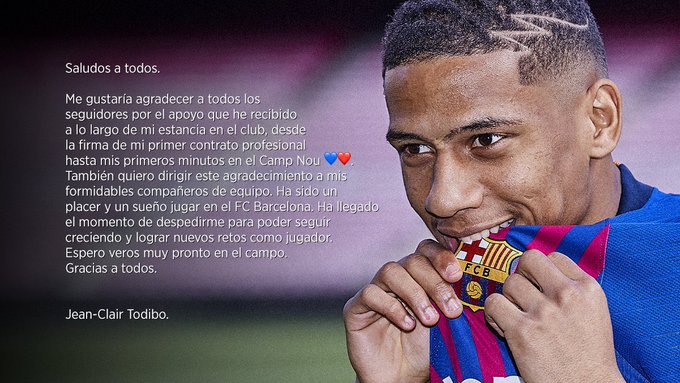 Central defender Jean-Clair Todibo has penned an open letter to Barcelona fans after leaving the club to join Benfica on a two-year long loan deal.

The Lisbon-based side have paid €2m to secure the deal for the defender and will have the option of signing the Frenchman on a permanent basis for €20m.

Todibo, 20, had only been involved in four La Liga matches for Barcelona – with two of his three starts coming after the league title was secured in the 2018/19 campaign – before spending the second half of last season on loan at Schalke.

“I would like to thank all the fans for the support I have received throughout my stay at the club, from the signing of my first professional contract to my first match at the Camp Nou,” Todibo wrote on Twitter.

“I also want to extend this thanks to my formidable team-mates. It has been a pleasure and a dream to play for Barcelona. The time has come for me to say goodbye and to be able to continue growing and facing new challenges as a player.

“I hope to see you very soon. Thank you all.”

The defender only joined the Catalan giants in January last year, ending a long running contractual dispute with previous club Toulouse in Ligue 1.