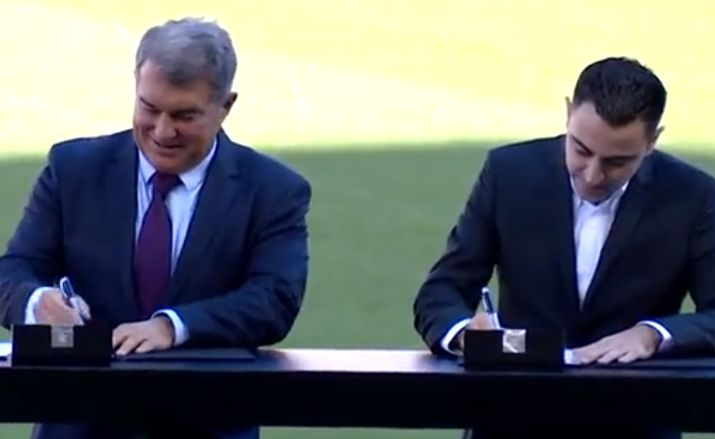 Xavi Hernandez is now officially the head coach of FC Barcelona after more than a week of speculation and negotiations.

The former Barca midfielder has spent the last two years in charge of Al-Sadd, but after days of talks, Barcelona chiefs Mateu Alemany and Rafa Yuste agreed a deal to bring Xavi home after six years.

The World Cup winner won all there was to win at Barca during one of the club’s most successful periods of all time.

And he has now returned to Camp Nou, where he was welcomed by more than 25,000 fans on Monday afternoon.

During his official unveiling Xavi also signed his contract with Barca, which will run until the summer of 2024.

Barca president Joan Laporta also signed the paperwork, and fans in attendance were delighted to see the contracts finally signed ahead of Xavi taking his first session on Tuesday morning.

You can watch the moment at the bottom of this page.

And there it is! pic.twitter.com/yFdrGsEuNi