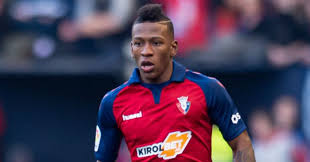 Barcelona are considering a summer move for Watford full back Pervis Estupinan, currently on loan at La Liga side Osasuna.

The Ecuadorian international joined the Hornets from local club LDU Quito in 2016, but he is yet to make an appearance for the Premier League club.

The 22-year old has spent the last four seasons on loan at different Spanish clubs, including Granada, Almeria, Real Mallorca and now Osasuna.

He has been ever present for Jagoba Arrasate’s side in 2019-20, starting 27 of their 28 La Liga games this season at left back.

His consistent form has caught the eye in recent weeks, with reports from Diario Sport claiming La Blaugrana are now preparing a €10m bid.

Watford are rumoured to be open to a move, with a clause in the loan deal which allows them to end Estupinan’s two year loan this summer, if they receive an acceptable offer.

The report states if Quique Setien’s side do make an move in the coming months, they will subsequently loan him to Real Valladolid for the 2020-21 season.