Today's front-page headlines in Marca, AS and Mundo Deportivo. 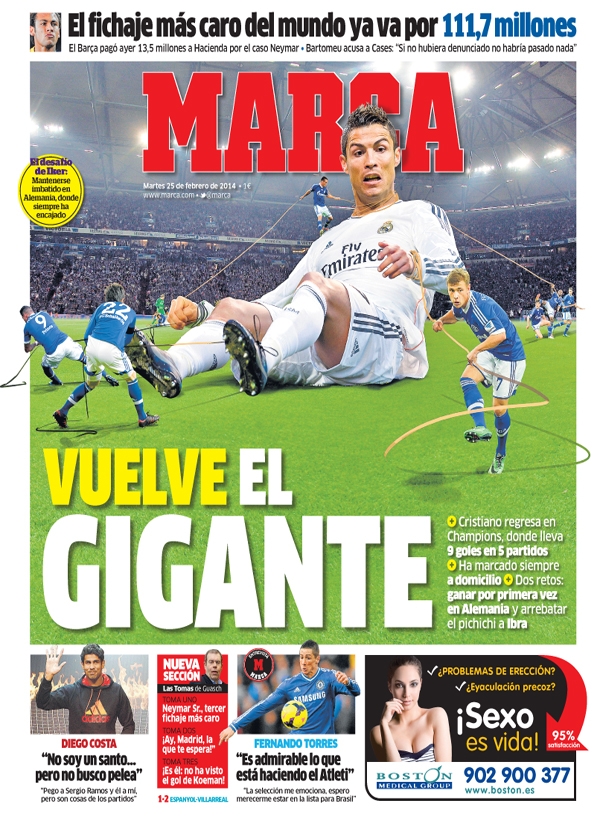 The Giant Returns
Cristiano returns to the Champions League, where he has scored nine goals in five games
He always scores at home
Two challenges: To win in Germany for the first time and to take over from Zlatan in the race for top-scorer
Diego Costa: "I am not a saint, but I do not look for fights"
"I hit Sergio Ramos and he hit me, but these are things that happen in a football match"
Fernando Torres: "It is admirable what Atleti are doing"
"Playing for Spain is emotional for me, I hope I make the list for Brazil"
Neymar senior is the third most expensive signing
Ay, Madrid, they are waiting for you
The signing of Neymar is the most expensive in history: It was for 111.7€ million
Barca paid 13.5€ million to the tax office yesterday
Bartomeu accuses Cases: "If he had not said anything, nothing would have happened" 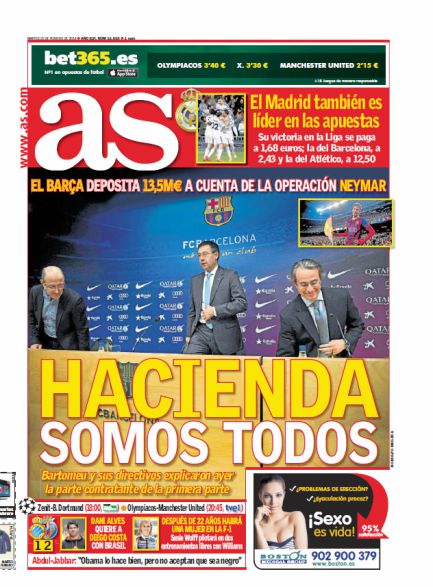 To the tax office
Bartomeu and his directors explain yesterday the first part of Neymar's contract
Barca deposit 13.5€ million with the tax office for Neymar
Madrid are the bookies' favourites
Victory in La Liga is paying 1.68 should Madrid win, 2.43 should Barca win and 12.5 should Atletico win
Dani Alves wants Diego Costa in the Brazil squad
After 22 years, there will be a woman in the Formula 1
Susie Wolff will drive for Williams for two sessions 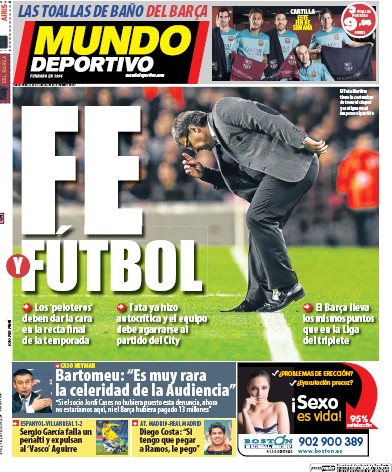 Faith and football
The key players need to show up in the final straight of the season
Tata has criticised himself and the team and must get a hold of things for the game against City
Barca have the same points they had when they won the triple
Bartomeu: "It is very strange the rapidness that this trial has progressed at"
"If club member Jordi Cases had not said anything, we would not be where we are now and Barca would not have had to pay 13 million"
Sergio Garcia misses a penalty and Aguirre is sent off
Diego Costa: "If I have to hit Ramos, I hit him"