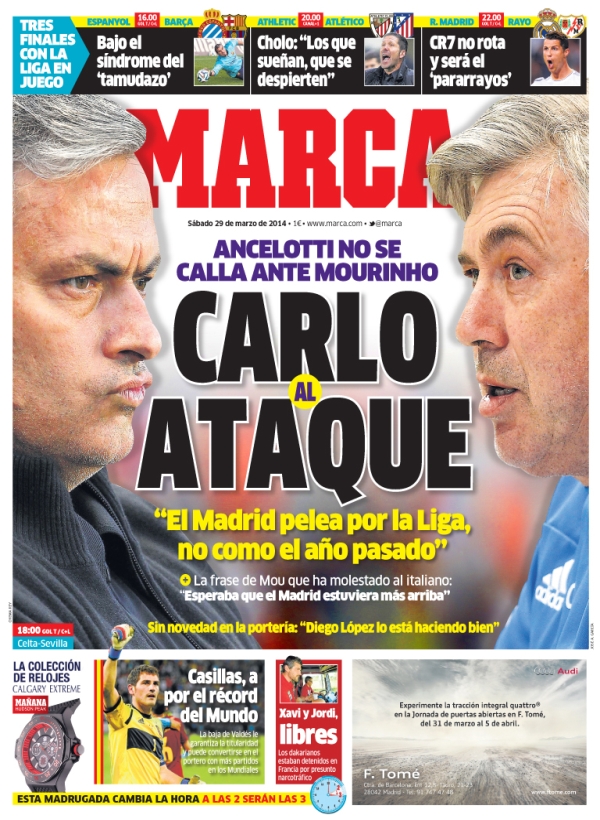 Ancelotti does not keep quiet with Mourinho

Carlo on the attack
"Madrid are fighting for La Liga, not like last year"
Mou's comment that has annoyed the Italian: "I expected Madrid to be much higher than they are"
No news about the goalkeeping situation: "Diego Lopez is doing well"
Three finals for La Liga
Espanyol v Barca, under the 'Tamudazo' (when the player Tamudo undid Barca's title hopes back in 2007)
Athletic v Atletico, Cholo: "Those who dream, wake up"
Real Madrid v Rayo: CR7 is not dead and he will be the lighting strike that he is against Rayo
Casillas, going for the world record
The injury to Valdes guarantees Casillas' place in the Spanish side and he will be going for the record of most matches played at the world cup
Tomorrow morning, change the hour from 2 to 3 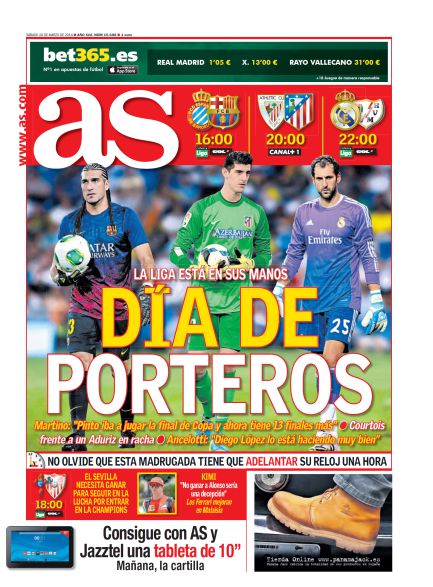 La Liga is in the their hands; The day of the goalkeepers
Martino: "Pinto was going to play the final of the Copa and now he has 13 finals to play
Courtois faces Aduriz who is on a drought
Ancelotti: "Diego Lopez is doing well"
Sevilla need to win to continue fighting for the Champions League spot
Kimi: "To not beat Alonso would be a disappointment" 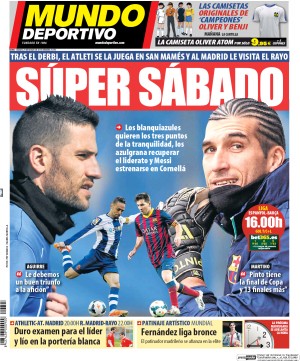 Super Saturday
Los Blanquiazulres wants three points so that can relax a bit more while los Azulgranas want to regain the lead in La Liga and Messi wants to shine at the Cornella
Aguirre: "We must give our fans a great victory"
Martino: "Pinto was going to play the Copa final and now he has 13 finals"
Athletic v Atletico: San Mames, a test of fire for Los Colchoneros
Real Madrid v Rayo: A high-flying Rayo visit a Madrid side with problems