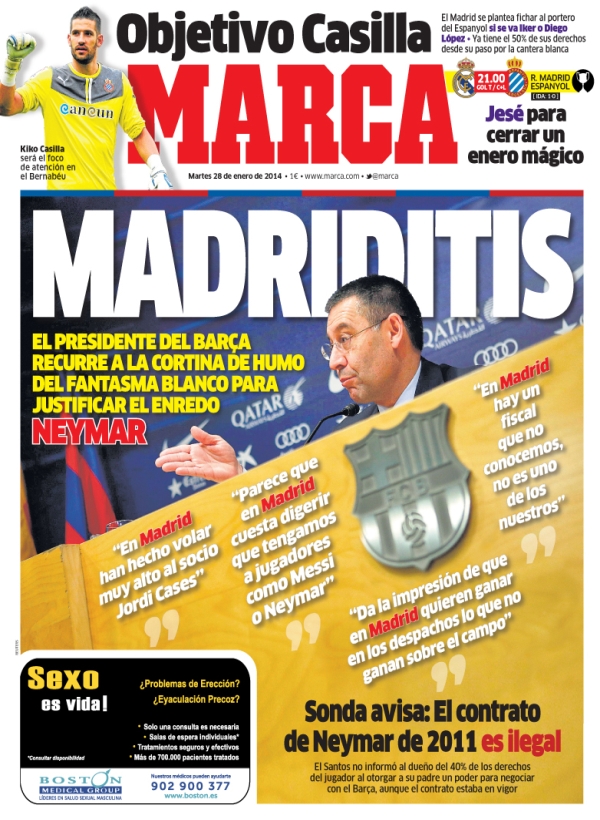 Madriditis
Barca President resorts to the smokescreen of 'the white shadow' to justify the mess surrounding Neymar
"In Madrid they have made much of club member Jordi Cases"
"It seems that it takes its toll on Madrid to see that we have players like Neymar and Lionel Messi"
"In Madrid there is a certain prosecutor that we do not know, he is not one of us"
"It gives the impression that Madrid want to win in the offices what they cannot win on the field"
On Sound Advice: Neymar's 2011 contract is illegal
Santos owner was not informed of the 40 per cent of rights to the player was given to his father to negotiate with Barcelona, even though the contract was in force
Objective Casilla: Madrid plan to sign the Espanyol goalkeeper if Iker or Diego Lopez leaves
Already they own 50 per cent of his rights since he came from the Madrid youth club
Jese to close out a magical month of January 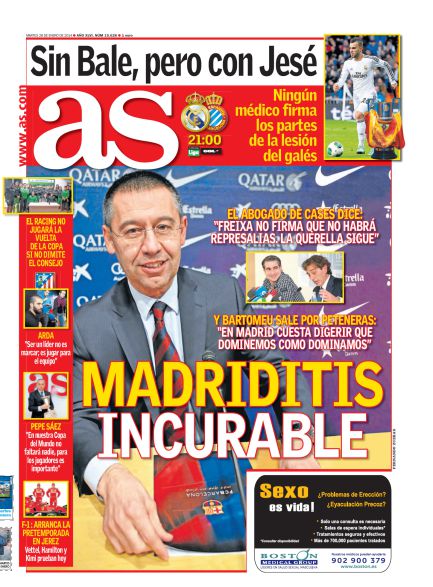 Madriditis incurable
Cases' lawyer says: "Freixa does not sign as there will be no retaliation, the mess continues"
And Bartomeu takes aim at Madrid: "In Madrid it takes its toll on them to see that we dominate how we dominate"
Without Bale but with Jese
Not one doctor signs off on what is wrong with the Welshman
Racing will play the return leg of the Copa if the board does not resign
Arda: "To be a leader does not mean scoring; it is to play for the team"
Pepe Saez: "In our World Cup, nobody will be missing as this is important for the players"
Formula 1: Preseason kicks off in Jerez, Vettel Hamilton and Kimi trial today 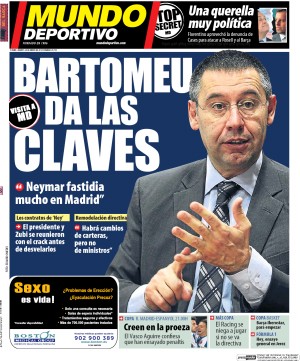 Bartomeu makes some things clear
"Neymar annoys Madrid a lot"
Ney's contract
The President and Zubi met with the star before discussing his contract in public
A reshaping of the management team
"There will be changes in departments but not with the ministers"
A very political debacle
Florentino takes advantage of the action taken by Cases to attack Rosell and Barca
They believe
Aguirre confesses his team have practised penalties
Copa del Rey: Racing refuse to play if their directors do not continue