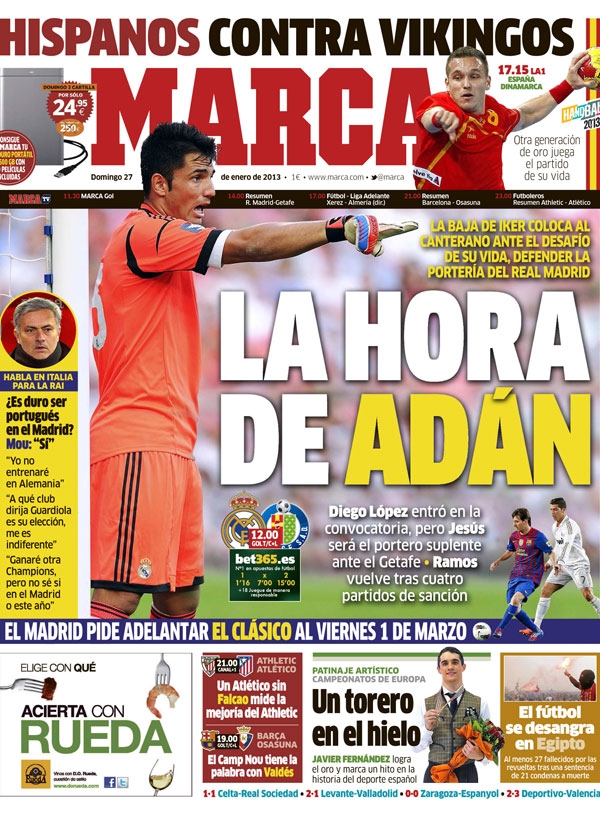 The hour of Adan

The absence of Iker puts the Canterano before his great challenge, to defend the Real Madrid goal

Diego Lopez to be called up, but Jesus will be the substitute against Getafe, Ramos to return after four games instead of five

Mourinho talks in Italy on Rai

“It is difficult to be Portuguese in Madrid”, Mou said, “Si”

“I will not coach in Germany” – Mou

“That club he has chosen is his choice, it is different for me” – Mou

“To win another Champions League, but, I do not know it will be with Madrid this year” – Mou

Barca v Osasuna: No word from Camp Nou about Valdes

Football bleeds in Egypt: At least 27 die because of riots sparked by the 21 death sentences

Handball world cup: Hispanos against the Vikings, another golden generation plays the game of their lives 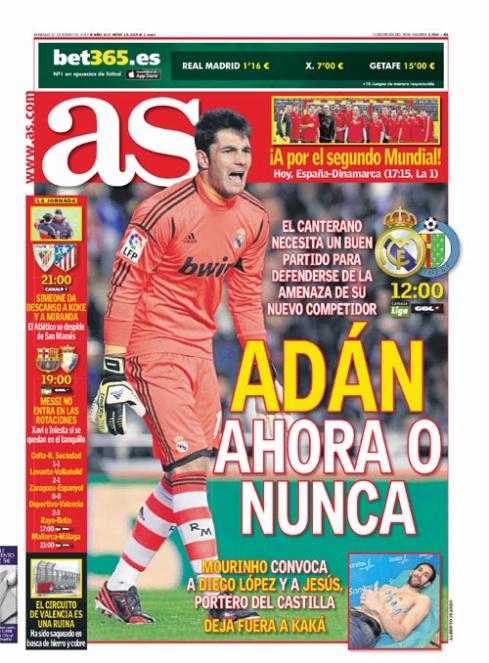 Mourinho calls up Diego Lopez and Jesus, a goalkeeper from the Castilla and leaves out Kaka

Barcelona v Osasuna: Messi not part of the rotation, Xavi and Iniesta left on the bench

The circuit in Valencia is in ruins

It has been looted in search of iron and copper 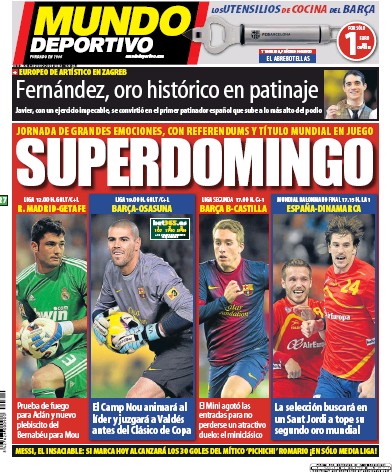 A match day of great emotion, with referendums and a world title at stake

Real Madrid v Getafe: Litmus test for Adan and the new plebiscite at the Bernabeu for Mourinho

Barca v Osasuna: Camp Nou to animate the leader and to play Valdes ahead of the Clasico in the Copa

Barca B v Castilla: Tickets sold out for the ‘Mini’ so don’t miss out on the appealing duel that is the ‘Mini’ Clasico

Javier, with an impeccable routine, becomes the first Spanish skater to sit at the top of the podium

Messi, the Insatiable: If he scores today he will reach the 30 goals of the mythical ‘Pichichi’ Romario at only the half way stage of La Liga