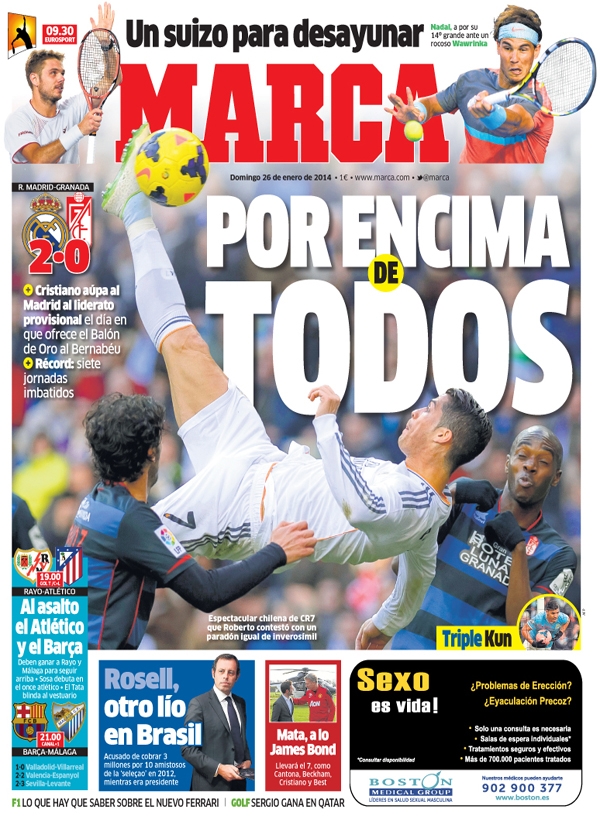 On top of everyone
Cristiano takes Madrid to the top, temporarily, after showing off his Balon d'Or to the Bernabeu
Record: Seven games unbeaten
Atletico and Barca assault: They have to beat Rayo and Malaga, respectively, to continue on top
Sosa to debut in the first eleven
Tata keeps his cards close to his chest
Rosell, another mess in Brazil
Accused of taking 3€ million for ten Selecao friendly games in 2012
Mata, like James Bond
He will wear number 7, like Cantona, Beckham, Cristiano and Best
Formula 1: What you have to know about the new Ferrari
A Swiss for breakfast: Nadal going for his 14th Grand Slam 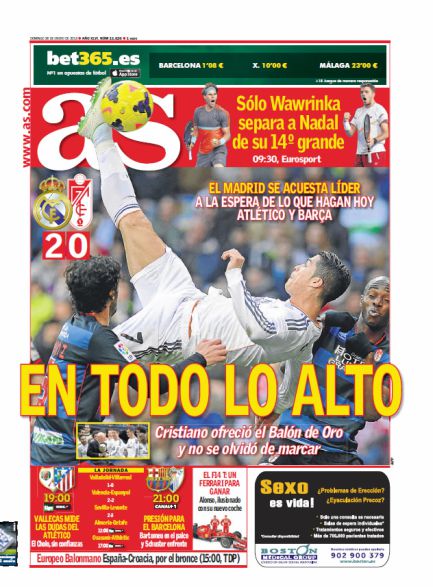 To the top
Cristiano shows off his Balon d'Or and does not forget his customary goal
Madrid ends the day as leaders and waits for what Atletico and Barca do today
Vallecas to test an Atletico with a few doubts
Pressure on Barca: Bartomeu to see his first game as President with Schuster the opposition
Formula F14: A Ferrari to win
Alonso is dreaming with his new car
Only Warwinka seperates Nadal and his 14th Grand Slam
Come on Barca
The players have their aim; to win and regain top spot
Martino: "The change will not affect the team"
Bartomeu's first game as President
Homage to Xavi and the return of Afellay
F1: Like this the F14T
Alonso is satisfied with his new car: "I am very content"
Nadal, going for Wawrinka and Sampras
Rafa wants to win his 14th Grand Slam to equal Sampras' record
Aguero hat-trick and victory for City
Los Blancos end the day as leaders