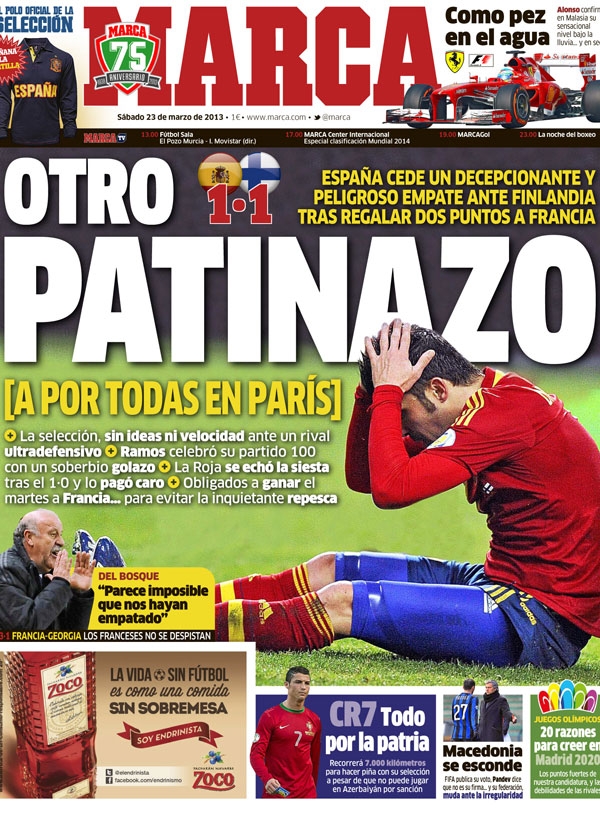 Another Slip-up Spain give away crucial points disappointingly and the dangerous draw leaves them two points behind France Everything for Paris now The national team, without ideas and pace before a ultra-defensive rival Ramos celebrates his 100th game with a splendid goal La Roja go for a siesta after going up a goal and pay dearly Obligated now to win on Tuesday in France..to avoid a disturbing play-off Del Bosque: "It seems impossible that have drawn with us" France 3-1 Georgia: The French do not deceive CR7 all for the father Goes 7000 kms to make it with his team despite that he cannot pay against Azerbaijan because of a suspension Macedonia hide FIFA publish Pandev's vote that he said he voted for Mou...and the federation say nothing Olympic games: 20 reasons to believe in Madrid 2020's bid The strong points about our candidatur Peaceful water Alonso confident in Malaysia and he is feeling as calm as the rain 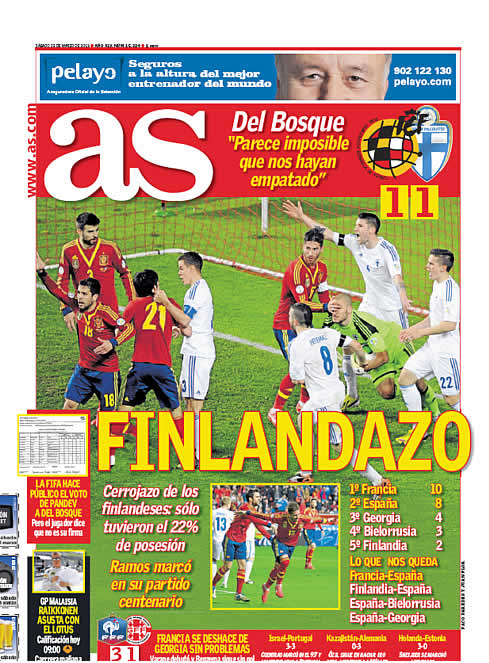 Amazing Finland
The Finnish shut out their rival: only had 22 per cent of the ball
Ramos scores a goal on his 100th game
France 10 points, Spain 8 points, Georgia 4 points, Belarus 3 points, Finland 2 points
Remaining games for Spain, France (A), Finland (A), Belarus (H), Georgia (H)
France deal with Georgia with little fuss
Varane debuts and Benzema continues his scoring drought
Israel 3-3 Portugal: Coentrao scores in the last minute to keep Portugal alive
Kazakhstan 0-3 Germany: Ozil continues his streak: gives another assist for Muller
Holland 3-0 Estonia: Sneijder leaves the field injured
FIFA makes public the vote of Pandev for Del Bosque
GP Malaysia: Raikkonen looks good in his Lotus
Del Bosque: "It seems impossible that they have draw with us" 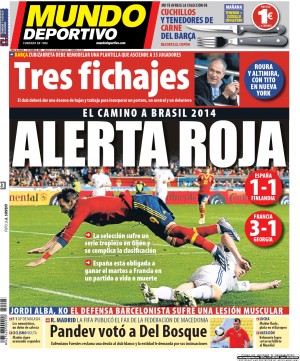 The road to Brazil 2014, Red alert
La seleccion suffer a serious set-back in Gijon and have now complicated their qualification
Spain have to win on Tuesday away to France in a game of life and death
Jordi Alba, injured: The Barca defender suffers an injury
Three signings: Barca will have to work hard to sign a goalkeeper, a defender and a forward
Roura and Altimira with Tito in New York
Real Madrid: FIFA publish the fax from the Macedonia federation
Pandev voted for Del Bosque
Eufemiano Fuentes claims he is owed a debt by Real Madrid
GP Malaysia: Rain causing problems for the cars' tyres
Cycling: Martin continues coming out second