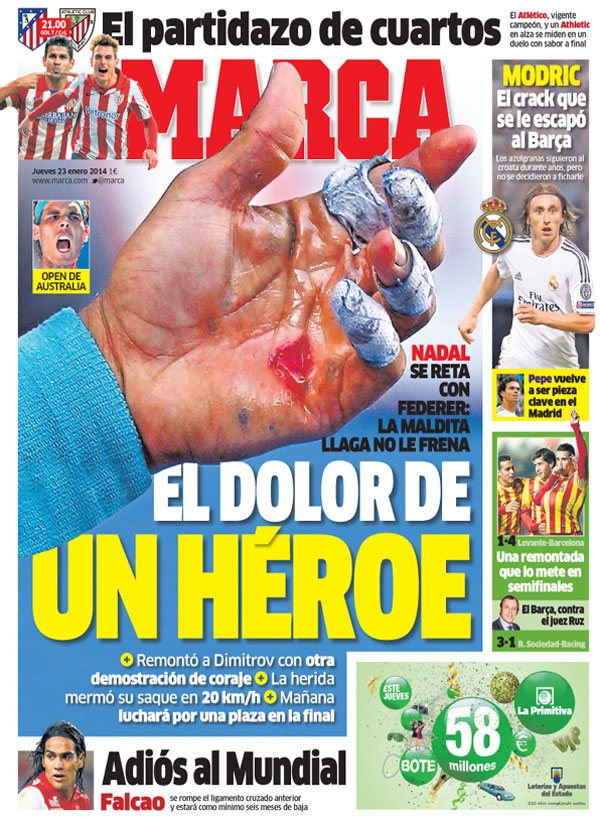 The pain of a hero
Nadal's Federer challenge: The wounds won't stop him
Nadal comes back to beat Dimitrov in another display of great courage
The injury reduces his serve by 20km/h
Tomorrow he will fight for a place in the final
Goodbye to the World Cup
Falcao tears his anterior cruciate ligament and will be out for at least six months
The big clash of the round
Atletico, the reigning champions, and an Athletic on the up meet in a game that feels like a final
Modric: The start that got away from Barca
Los Azulgranes tracked him for years but never decided to sign him
Pepe returns to be a key player for Madrid
A comeback that puts Barca in the semifinals 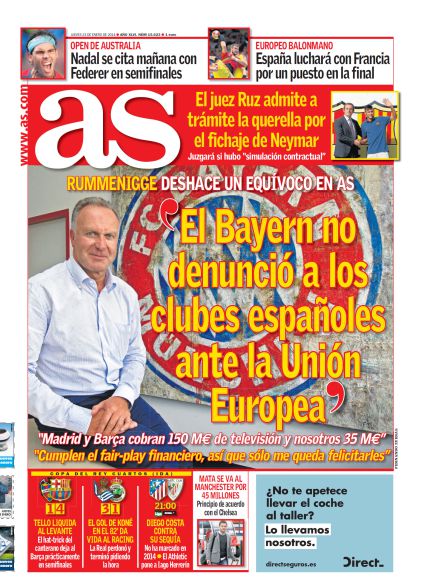 Rummenigge makes something clear to AS
"Bayern did not denounce Spanish clubs to the European Union"
"Madrid and Barca earn €150 million from television, we earn €35 million"
"They still comply with fair-play rules so I can only be happy for them"
Judge Ruez accepts the action requested over the signing of Neymar
He will decide whether there were any 'contractual irregularities'
Australian Open: Nadal makes a date with Federer tomorrow
Spain will battle with France for a place in the final
Tello undoes Levante: A hat-trick from the Canterano leaves Barca practically in the semifinals
A goal from Kone in the 82nd minute keeps Racing alive: La Real finish the game nervously
Diego Costa's looking to break his drouth
He has not scored in 2014
Athletic to play Iago Herrerin 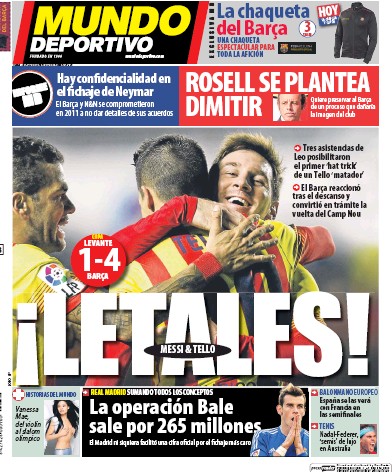 Lethal!
Three assists from Leo help Tello 'the killer' the score his first hat-trick
Barca reacted well after the break becoming a different team
Rosell to consider Dimitir
He wants to protect the club from a process that could damage its' image
There is confidentiality in the signing of Neymar
Barca and Neymar's party agreed in 2011 to not give details over the agreements
Copa del Rey: A goal from Kone keeps Racing alive
A date of champions in the semifinals as Athletic and Atletico meet
Real Madrid: The operation to sign Gareth Bale went as high as €265 million
Madrid do not even want to provide on official number for their signing of Bale