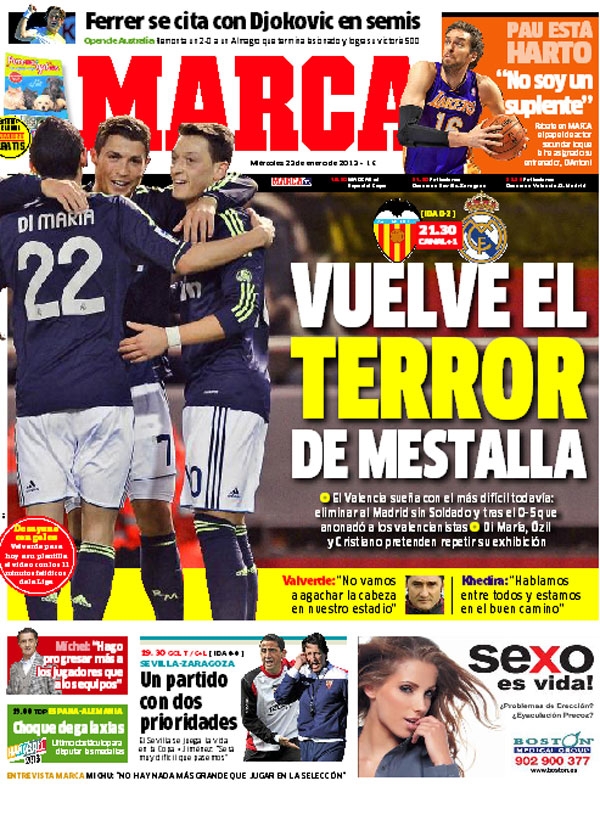 The terror of the Mestalla returns

Valencia dreaming of a achieving the most difficult task: eliminating Madrid without Soldado and after their 5-0 annihilation

Di Maria, Ozil and Cristiano to try and repeat their exhibition

Valverde: “We will not bow our heads in our own stadium”

Khedira: “We have spoken to each other and we are now walking in the right direction”

Michel: “I make more progress with the players than the team”

Interview with Marca and Michu: “There is nothing greater than playing for Spain”

Australian Open: Ferrer books a place with Djokovic in the semis

Pau is tired: “I am not a substitute” 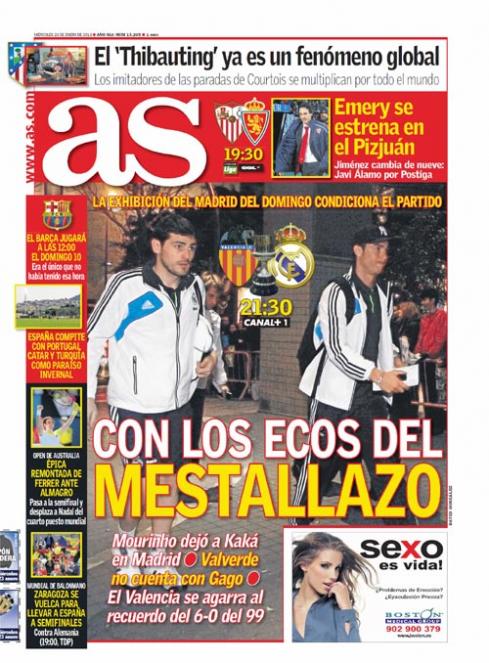 With the echoes of their Mestalla spectacular

The exhibition of Madrid from Sunday conditions the match

Mourinho leaves Kaka in Madrid; Valverde is not counting on Gago; Valencia holding on to the memory of their 6-0 win in 99

Barca to play at 12 on Sunday 10: The only time they have not had to play at

Emery debuts at the Pizjuan

‘Thibauting’ already is a global phenomenon

Spain compete with Portugal, Qatar and Turkey for winter paradise

Australian Open: An epic comeback from Ferrer against Almagro

Handball world cup: Zaragoza tips that Spain in the semi-finals (against Germany at 19:00) 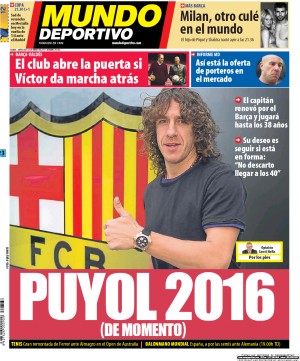 His desire is to continue in the same way: “I do not rule out staying until 40”

Barca and Valdes: The club opens the 21 for Valdes if he wants to change his decision

These are the goalkeepers on the market

Milan, another cule in the world: The son of Pique and Shakira was born yesterday at 21.36

Tennis: A great comeback from Ferrer against Almagro at the Australian Open

Handball: Spain, going for the semi-finals against Germany