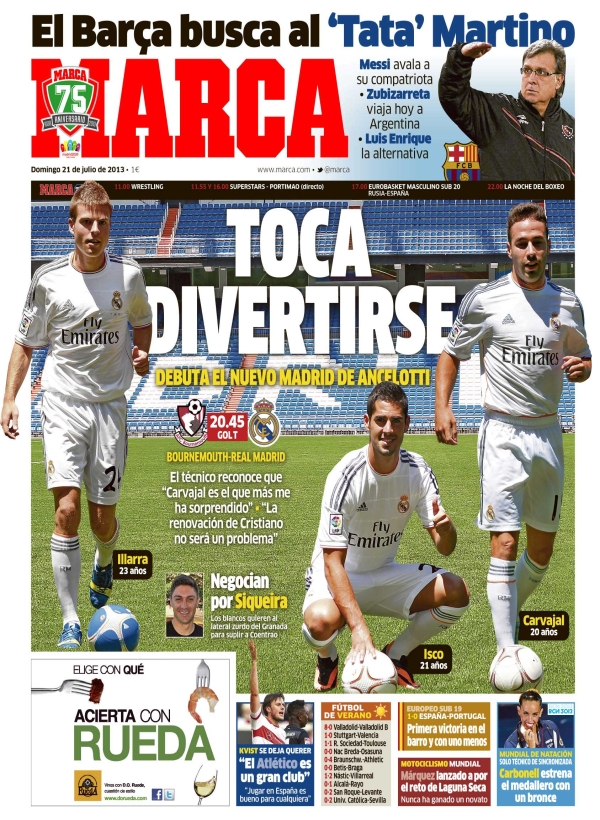 Some fun
Debut of the new Madrid of Ancelotti
Bournemouth v Real Madrid 8.45
The coach points out that "Carvajal has surprised me the most" and "the renewal of Cristiano's contract will not be a problem"
Negotiating for Siqueira
Los Blancos want the left full back of Granada to replace Coentrao
Barca look to 'Tata' Martino
Messi approves of his compatriot
Zubizarreta travels today to Argentina
Luis Enrique is the alternative
Kvist is wanted
"Atletico is a great club", Kvist
"To play in Spain would be great with any team"
European Under 19 Championship
Spain 1-0 Portugal
The first victory agaist a defensive opponent and with one less man
Motorcycling: Marquez rises to the challenge of Laguna Seca
He has never won this race
World Cup swimming: Carbonell wins bronze 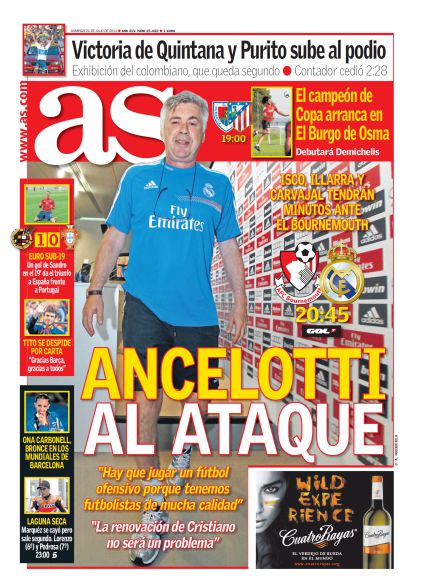 Ancelotti to attack
"We have to play attacking football because we have players with great quality"
"The renewal of Cristiano's contract will not be a problem"
Isco, Illarra and Carvajal will get their first chances against Bournemouth
Victory for Quintana and Purito as they finish on the podium
The Columbian puts on an exhibition and finishes second, Contador loses 2.28 minutes
European Under 19 Championship: A goal from Sandro in the 19th minute gives Spain victory over Portugal
Tito says goodbye: "Thanks Barca, thank you everyone"
Carbonell gets bronze at World Swimming Championship in Barcelona
Laguna Seca: Marques falls but ends second, Lorenzo and Pedrosa 6th and 7th, respectively 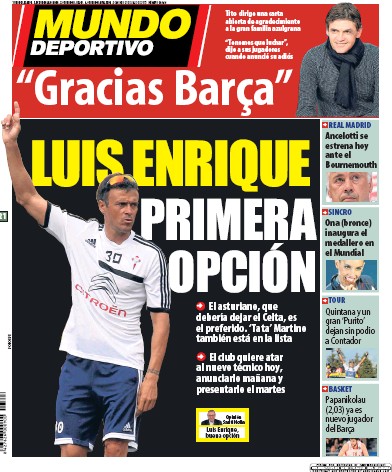 Luis Enrique the first option
The Asturian, who should leave Celta, is the preferred option
'Tata' Martino is an alternative
The Club want to appoint a new coach today, to announce it tomorrow and to present him on Tuesday
"Thank you Barca," Ttto
Tito tells of his gratitude to Barcelona in an open letter to the Barca family
"We have to fight," he told his players when he announced his goodbye
Real Madrid: Ancelotti debuts today against Bournemouth
Swimming: Bronze for Carbonell at the World Championships
Tour: Quintana and the great 'Purito' with a podium finish with Contador absent
Basketball: Papanikolau is already a new Barca players