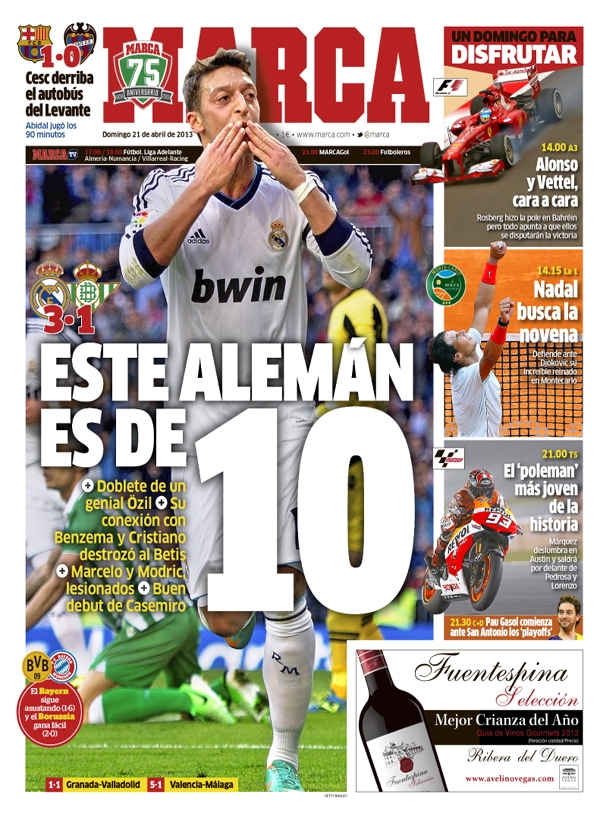 This is the German number 10
A double for Ozil
His connection with Benzema and Ronaldo destroys Betis
Marcelo and Modric suffer injuries
A good debut from Casemiro
Barcelona 1-0 Levante
Cesc brings down the Levante bus
Abidal plays 90 minutes
Formula 1: A Sunday to enjoy
Alonso and Vettel go face to face
Rosberg made pole position but all are aiming for victory
Nada in search of the ninth
He is to defend his incredible rein in Montecarlo against Djokovic
MotoGP: The youngest 'poleman' in history
Marquez dazzles Austin and will start in pole position ahead of Pedrosa and Lorenzo

Basketball: Gasol to start against San Antonio in the playoffs 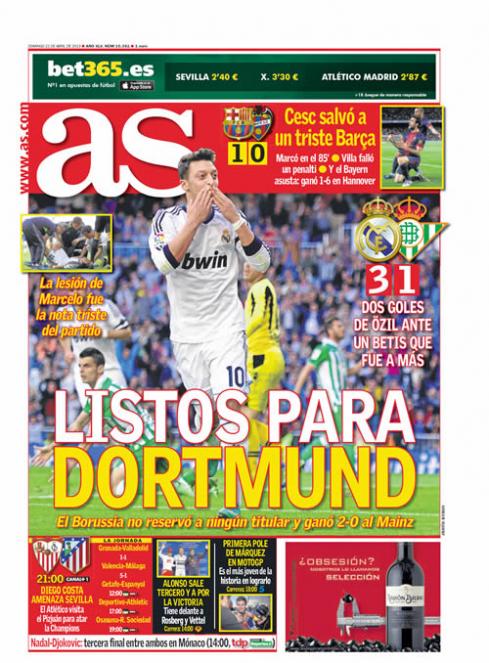 Two goals from Ozil against Betis and a little more
Ready for Dortmund
Borussia do not rest one singly players in their 2-0 win over Mainz
Marcelo injury put a damper on the evening
Barcelona 1-0 Levante: Cesc rescues an underpar Barca
He scores in the 85th minute, Villa misses a penalty
Bayern send a warning; 1-6 win over Hannover
Diego Costa threatens Sevilla
Atletico visit Pizjuan looking to tie up Champions League football
Alonso to start in third and is going for victory
He has Rosberg and Vettel ahead of him
Marquez in pole position in the MotoGP
The youngest ever to win pole position

Nadal - Djokovic; the third final between the two on Monaco 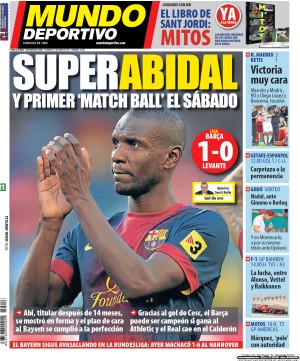 and he gets the matchball
Abi, started for the first time in 14 months, showed good form and the ability to face Bayern
Thanks to a goal from Cesc, Barca can be champion if they beat Athletic and Real fall at the Calderon
Bayern continue sailing in the Bundesliga: yesterday they crushed Hannover 1-6
Real Madrid 3-1 Real Betis
A costly victory
Marcelo and Modric injured
Lopez and Benzema pick up knocks
Nadal against Gimeno o Berloq
In Montecarlo going for his ninth title against Djokovic
Formula 1: A fight between Alonso, Vettel and Raikonnen