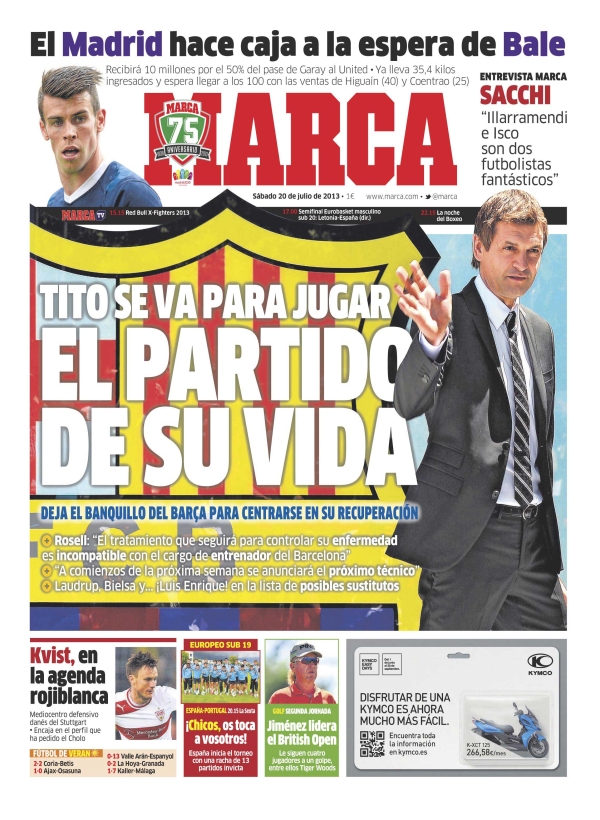 Tito goes to play the game of his life
He leaves the Barca bench to focus on his recuperation
Rosell: "The treatment that he continues with is incompatible with the responsibility of being the coach of Barcelona"
"At the start of next week we will announce our next coach"
Laudrup, Bielsa and Luis Enrique are all on the list as possible replacements
Madrid are banking money in the hope of getting Bale
They will receive 10€ million for the sale of Garay to United
Already they have recieved 35.4€ million from sales and the hope is that they will make 100€ million from the potential sales of Higuain (40) and Coentrao (25)
Sacchi interview: Illarramendi and Isco are two great footballers"
Kvist, being considered by the Rojiblanca
The defensive midfielder from Denmark currently plays for Stuttgart
He suits the profile of the player asked by Simeone
European Under 19: Chicos, its up to you
Spain will start their campaign on a 13-game winning streak

Jimenez leads the British Open He is followed closely by four players, including Tiger Woods 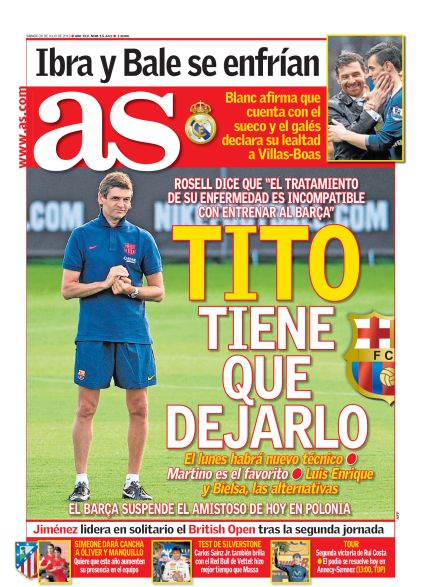 Tito has to quit
Rosell says that "the treatment of his sickness is incompatible with coaching Barcelona"
Monday will get a new coach
Martino is the favourite
Luis Enrique and Bielsa, are alternatives
Ibra and Bale rumours cool off
Blanc confirms that he is counting on the Swede and the Welshman declares his loyalty to Villas-Boas
Jimenez is the solitary leader at the British Open after the second day
Simeone to give chances to Oliver and Manquillo
He wants that this year they become important players
Silverstone test
Carlos Sainz Jr. also shines with Red Bull of Vettel; he makes a better time than Massa
Tour: The second victory for Rui Costa
The podium to be resolved today in Annecy-Semnoz 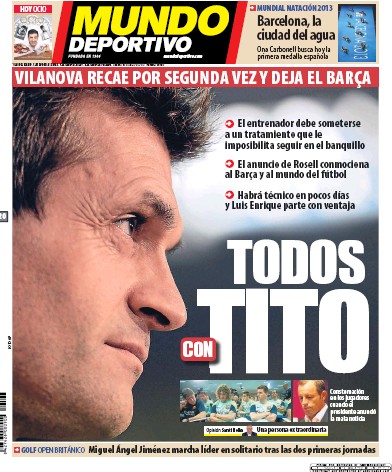 Vilanova suffers another relapse and leaves Barca
Everyone is with Tito
The coach must commit to his own treatment that makes it impossible to continue as Barca boss
The announcement of Rosell shakes Barca and the football world
There will be a new coach in a few days and Luis Enrique has the advantage
Consternation amongst the players when the president announced the bad news
World swimming championships 2013
Barcelona, the city of water
Ona Carbonell looks today for the first Spanish medal
Golf, British Open: Migual Angel Jimenez marches on as the solitary leader after two days