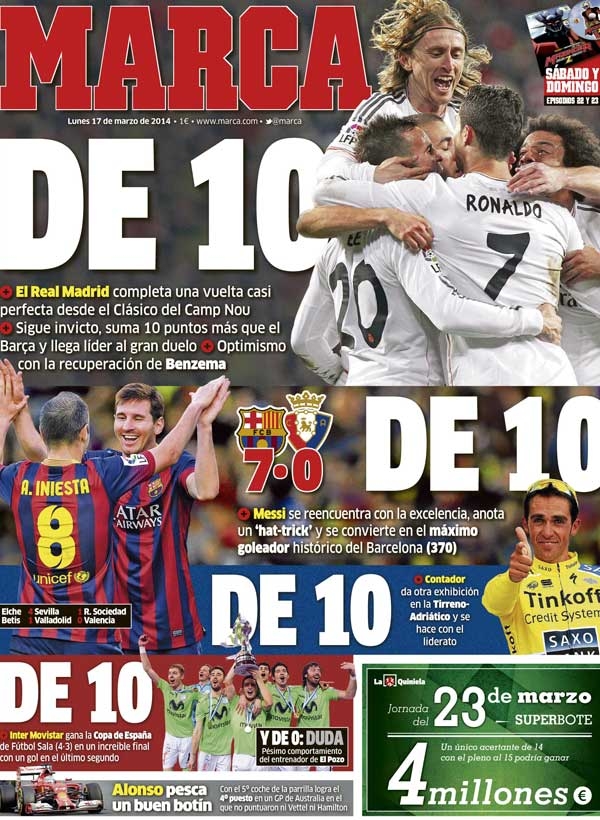 Go wild Mdoric scores another fine goal in full flight for Madrid Cristiano wet his beak again: Now 43 goals in 43 games Mallorca went ahead twice through two crossed balls Los Blancos came back in five minutes The two number '9's scored: Higuain on two occasions, Benzema once Mou saw the problems and put on Ozil and Benzema at the break for Morata and Arbeloa Barcelona v Rayo: The happy goodbye of Roura Hints that Tito is about to return Osasuna v Atletico: To recover his kingdom lost Bad results in Pamplona Getafe 1-0 Athletic: Borja returns to get the best of Bielsa's side Malaga v Espanyol: A game with the 'third time' Pichichi: Celebration of 100 years Centenary of the first real goalscorer in La Liga Our Nadal, for all life He demonstrated his talent and self-respect in his victory over Berdych, today he will play in the final 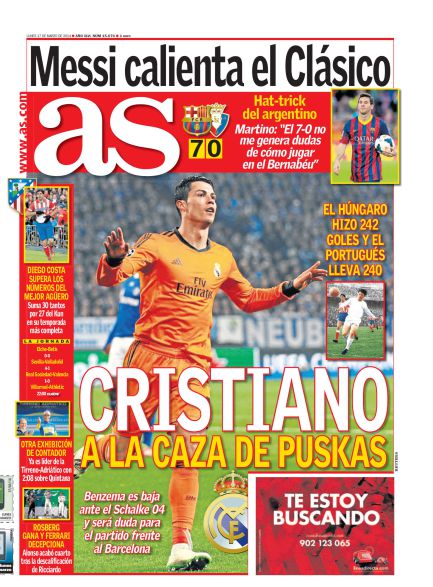 "The idea is to pressure Barca", Higuain,scorer of two goals sends a message..."There remains a long way in La Liga, we will fight until the last"
Real Madrid 5-2 Mallorca
Barca v Rayo: Rayo is the last challenge for Roura
Tito will be at Balaidos
Waiting for Falcao
Atletico need his goals to continue their fight for a Champions League place
Bilardo: "The Pope was a neighbour of Di Stefano and knows football"
Nadal books his place in the final of Indian Wells

Barca continue
Barca to confirm their favourites tag in the Champions League with a great triumph in La Liga
They will play with an eleven with a number of changes and Roura will advise over the danger of losing focus
Cugat and Pruna: "Puyol played with pain since October and will return when wants"
Six nations: Wales triumph after a fine exhibition against England
Malaga v Espanyol: To break the streak
Real Madrid 5-2 Mallorca: A misleading result
Patinaje artistico: Bronze medal for Javier Fernandez
Tennis: Nadal to the final of Indian Wells
Athletics: Barcelona lives today with a great Marathon fiesta