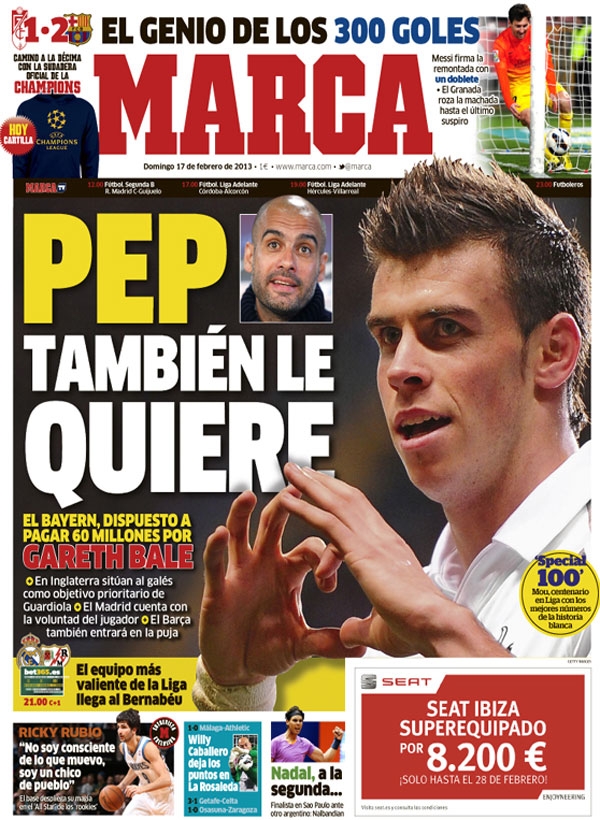 Pep also wants Bale Bayern willing to pay €60 million for Gareth Bale In England the situation with the Welsh is the number priority for Guardiola Madrid is the will of the player Barca also want to make a bid The most valiant team comes to the Bernabeu The genius makes it past 300 goals Messi leads the comeback with a double Granada ran until their last breath 'Special 100': Mou centenary in La Liga with the best numbers in the history of the club Ricky Rubio: "I am not consience of what I do, I am a just boy from the pueblo" Malaga 1-0 Athletic: Willy Caballero keeps the points at La Rosaleda Nadal, the second: Finalist in Sao Paulo before another Argentine, Nalbandian 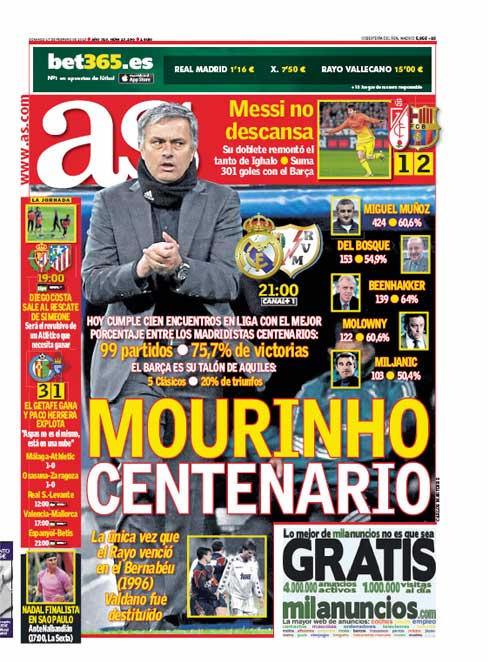 Centenary Mourinho
Today is the 100th game in La Liga for Mou who has the best percentage of wins amongst other Madridista centenarians
99 games: 75.7%
Barca is his Achilles heel: 5 games: 20% wins
Miguel Munoz 424 games: 60.6%7, Del Bosque 153: 54.9%, Beenhakker 139 games: 64%, Molowny 122 games: 60.6%, Miljanic 103 games: 50.4%
The only time Rayo have won at the Bernabeu (1996), Valdano was fired
Granada 1-2 Barcelona: Messi does not rest
Messi's double sees Barca comeback after going down to Ighalo's goal
He now has 301 goals for Barca
Valladolid v Atletico Madrid: Diego Costa to come to the rescue of Simeone
It will be a meeting that Atletico need to win
Getafe 3-1 Celta Vigo: Getafe win and Pace Herrera explodes
"Aspas is not the same, he is inconsistent", Herrera
Nadal a finalist in Sao Paulo: He will play Nalbandian 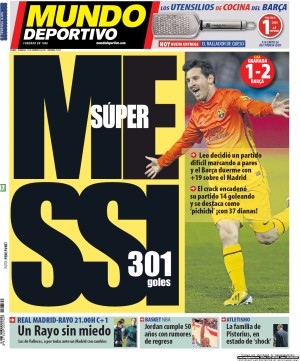 Super Messi, 301 goals
Leo decides a difficult match, scoring two goals as Barca cruise 19 points ahead of Real Madrid
The 'Crack' extends his goal streak for 14 games and is leading the Pichichi now with 37 goals in total
Real Madrid - Rayo: A Rayo without fear
Basketball: Jodran turns 50-years-old with rumours of a return
Athletics: The family of Pistorius in a state of 'shock'