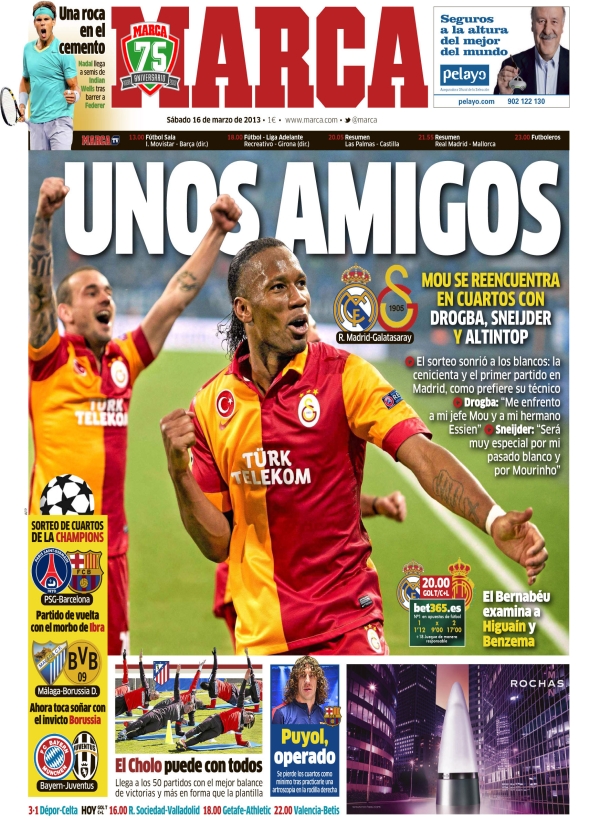 Some friends Mou to reunite in the quarter finals with Drogba, Sneijder and Altintop The draw smiled on Los Blancos: Cinderella and the first game in Madrid, like the coach prefers Drogba: "I will confront my boss Mou and my brother Essien" Sneijder: "It will be special because of my past with Madrid and Mourinho" Bernabeu exam for Higuain and Benzema The draw for the Champions PSG v Barcelona: the game that sees the return of Ibra Malaga v Dortmund: Now time to spoil the dreams of unbeaten Dortmund Bayern Munich v Juventus El Cholo can do with all He has 50 games to his names with the best balance of victories and the most in form team Puyol operation He will miss the quarter finals after undergoing surgery on his right knee yesterday A rock on the cement: Nadal into the semis of Indian Wells after beating Federer 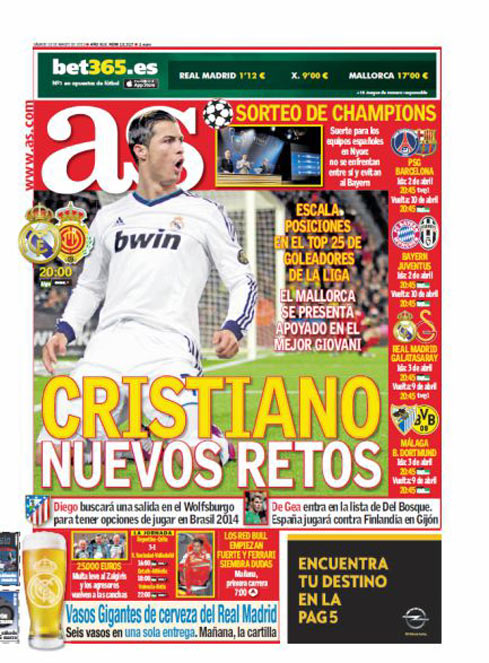 New challenges for Cristiano
To scale the top 25 list of goal scorers in La Liga
Mallorca show support in Giovani
Draw for the Champions League
Luck on the side of Spanish teams in Nyon as they avoid each other and Bayern
PSG v Barcelona, April 2, April 10
Bayern v Juventus: April 2, April 10
Real Madrid v Galatasaray: April 3 April 9
Malaga v Dortmund: April 3, April 9
Diego looks for an exit from Wolfsburg to better his options of playing at Brazil 2014
De Gea enters Del Bosque's list and could play against Finland in Gijon
Red Bull start strongly and Ferrari sowing doubts 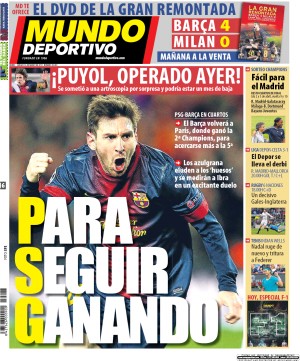 To continue winning
PSG - Barca in the quarters
Barca return to Paris, where they won their second Champions League, to continue their bid for their 5th
Los Azulgrana avoid the big guns and will measure up against Ibra
Puyol operated yesterday: He underwent arthroscopy surprisingly and could be out for a month
The draw for the Champions
Easy for Madrid
Real Madrid v Galatasaray
Malaga v Dortmund
Bayern v Juventus
La Liga: Depor 3-1 Celta
Depor take the derby
Rugby six nations
A decisive battle between England and Wales
Tennis, Indian Wells
Nadal roars again and crushes Federer