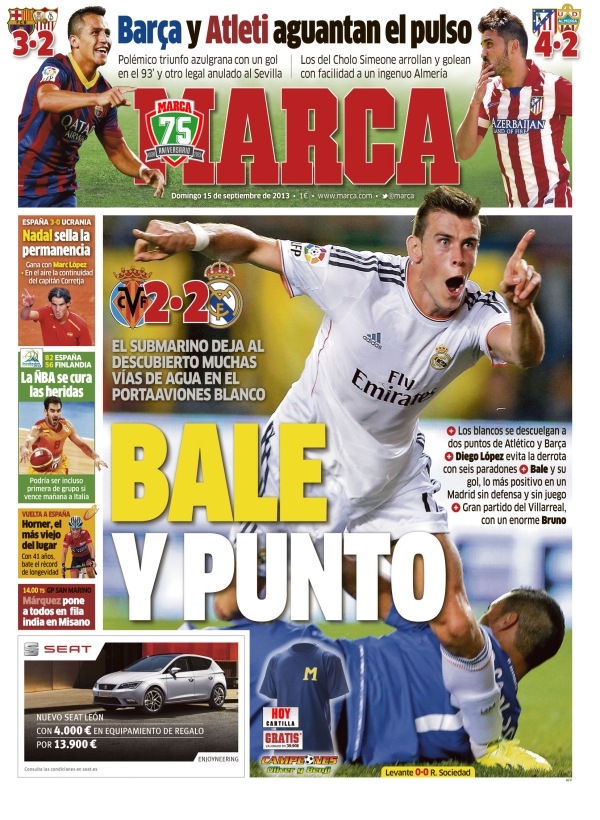 Bale and a point
The Submarines open many waterways in the white water carrier.
Los Blancos drop two points behind Atletico and Barca
Diego Lopez kept it from being a loss with six great saves
Bale and his goal was the real positive of the night but Madrid's defence leaves a lot to be desired
A great game by Villarreal with an enormous performance from Bruno
Barca and Atletico neck and neck at the top
A controversial victory for the Azulgrana with a goal in the 93rd minute and a legal goal from Sevilla not given
El Cholo's men roll on and score with ease against Almeria
Nadal seals Spanish win
He win alongside Marc Lopez
Vuelta of Spain: Horner, the oldest ever

With 41 years he has broken a new record 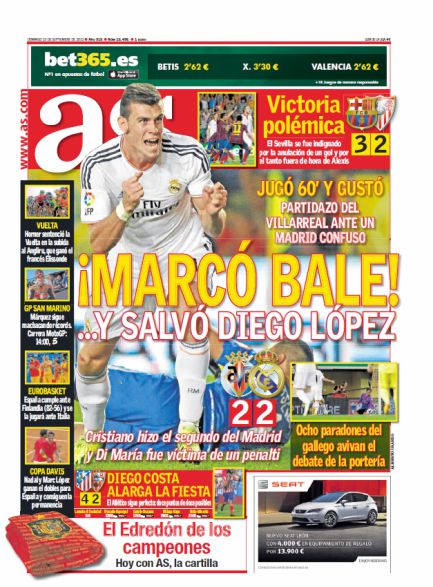 Bale scores and Diego Lopez saves
Cristiano got his second with Madrid and Di Maria was brought down illegally in the box
Eight great save from the Gallego increase the 'keeper debate
Bale played for 60 minutes and impressed
A great game from Villarreal against a confused Madrid
Controversial win
Sevilla outraged after a legal goal was not awarded to them and Alexis' goal which came after the game have finished
Diego Costa brings the party for Atletico
Atletico continue their perfect start: 12 points from a possible 12 so far
GP San Marino: Marquez continues breaking records
Basketball: Spain beat Finaland and now wait for Italy

Davis Cup: Nadal and Marc Lopez win in the doubles and Spain progress 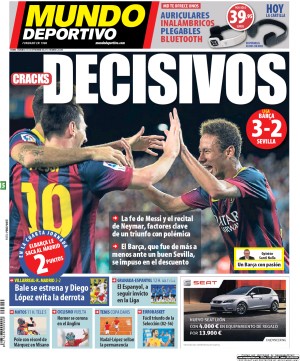 Game-changers
The faith in Messi and his partner is rewarded with a controversial win
Barca against a good Sevilla side, won it in injury time
Bale stars and Diego Lopez avoids defeat for Real Madrid
Cycling: Horner crowned winner in Angliru after an epic fight
Moto GP: Pole for record-breaking Marquez in Misano
Davis Cup: Nadal and Lopez seal win