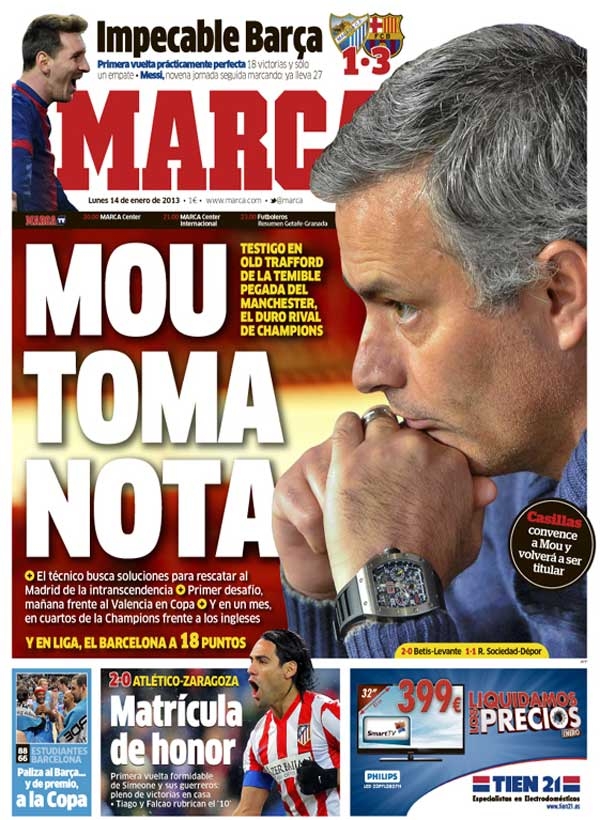 The coach searches for solutions to rescue Madrid fading into obscurity

First challenge, tomorrow against Valencia in the Copa del Rey

And in the league where Barcelona are 18 points ahead

Mou witnessed in Old Trafford of the fearsome Manchester, a tough Champions rival

Casillas convinces Mou and will return to the first team

The first return to La Liga of Simeone is impressive

His warriors keep winning at home

Tiago and Falcao complete the ‘10’

Estudiantes 88 Barcelona 66: beat Barca, the premiers and the Copa

Impeccable Barca: Their start to La Liga practically perfect, 18 win and one draw

Messi, nineteenth matchday continues to score and already has 27 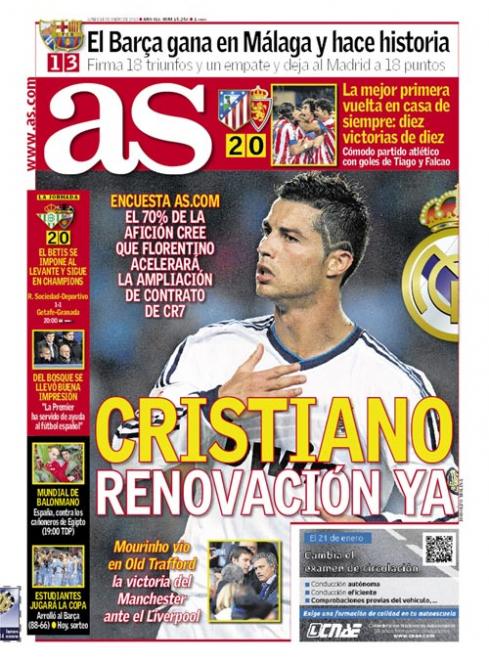 Mourinho watches at Old Trafford the victory of Manchester over Liverpool

Survey: 70 per cent of fans believe that Florentino will accelerate talks for CR7’s contract

Barca win in Malaga and make history: 18 triumphs and one draw leave Madrid 18 points behind

The best start at home, ten wins from ten

Comfortable game for Atletico with goals from Tiago and Falcao

Del Bosque gets a good impression: “the Premier has served to help Spanish football”

Estudiantes to play in the Cup: crush Barca 88-66, today the draw 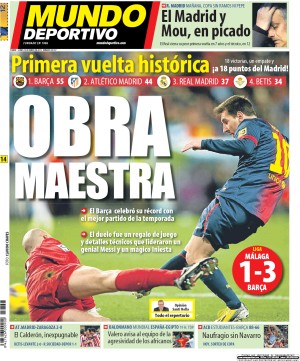 Masterpiece: Barca celebrate record with their best game of the season

The best start to the season in history with 18 wins, one draw and 18 points ahead of Madrid

Real Madrid, tomorrow in the Copa del Rey without Ramos and Pepe

Madrid and Mou in a pickle

Real finish their worst start to a season in seven years and for the Coach, in 12

Valero advises the team of the aggressiveness  of the Africans

Estudiantes 88-66 Barcelona: It’s a shipwreck without Navarro, tomorrow the draw for the Cup