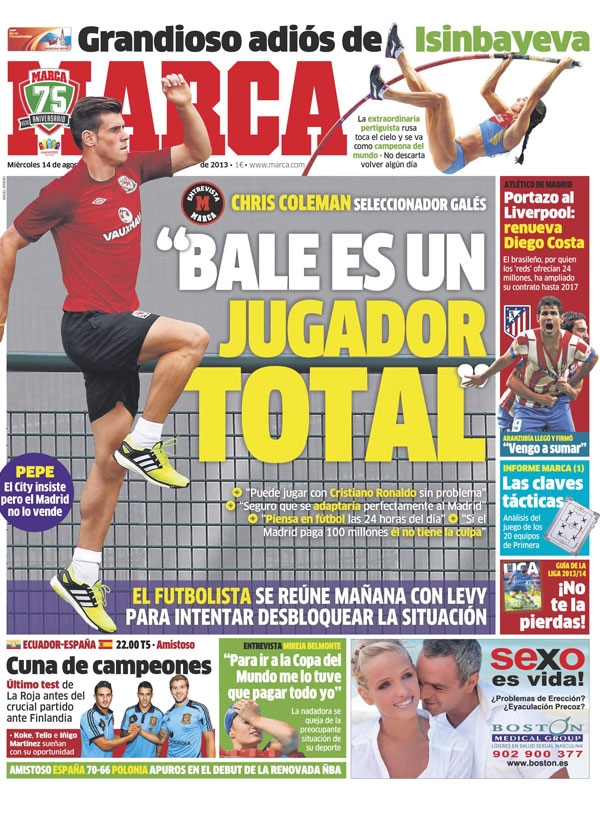 "Bale is a complete player," Chris Coleman, Wales coach
"He can play with Ronaldo no problem"
"I am sure that he would adapt perfectly to Madrid"
"He thinks of football 24 hours a day"
"If Madrid pays €100 million, it is not his fault"
Pepe: City want him but Madrid will not sell
Bale meets with Levy tomorrow to try and clear up the situation
Blow for Liverpool: Diego Costa to renew
The Brazilian, who is wanted by the Reds who are offering €24 million, has extended his contract until 2017
Tactics: Analysis of the tactics of the 20 La Liga teams
Guide to La Liga: Do not miss a thing
Ecuador v Spain: Champions unite
The last test for La Roja ahead of their crucial game against Finland
Koke, Tello, Inigo Martinez dream of playing
Interview with Mireia Belmonte
"To go to the world cup I had to pay for everything"
The swimmer complains about her preoccupation with her sport
Friendly, Spain 76-66 Poland
A gran goodbye from Isinbayeva

The extraordinary pole vaulter from Russia touches the sky and becomes champions: She does not discard returning one day 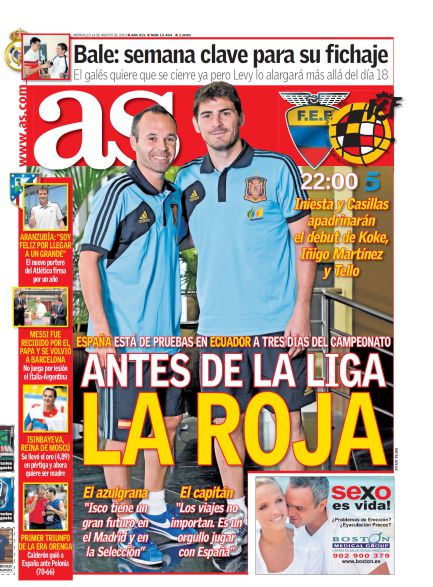 Before La Liga, La Roja
Spain to be tested in Ecuador three days before the championship starts
Iniesta and Casillas backing Tello, Koke and Inigo Martinez
Iniesta: "Isco has a great future at Real Madrid and with the Seleccion"
Casillas: "The traveling is not important, it is always a thing of pride to play for Spain"
Bale: A key week in his signing
The Welshman wants to close out the deal but Levy is stalling until the 18th
Aranzubia: "I am happy to be at a great club"
The new goalkeeper of Atletico signs for a year
Messi receives the Pope and returns to Barcelona
He will not play against Italy tonight 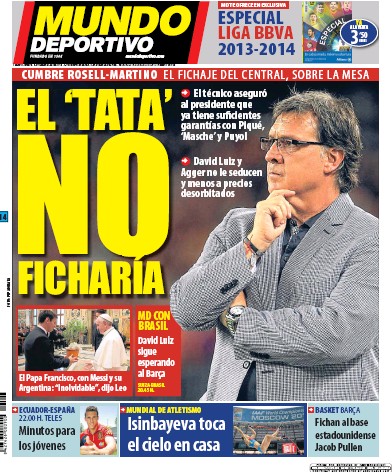 Tata not desperate for a central defender
Summit of Rosell and Martino: A central defender above all
The coach assures that the President he already has enough cover with Puyol, Masch and Pique
David Luiz and Agger do not convince him and less for their expensive prices
David Luiz continues to wait for Barcelona
Papa Francisco with Messi and Argentina: "Unforgettable" says Messi
Ecuador v Spain: Youth to be given a chance
World Athletics: Isinbayeva touches the sky