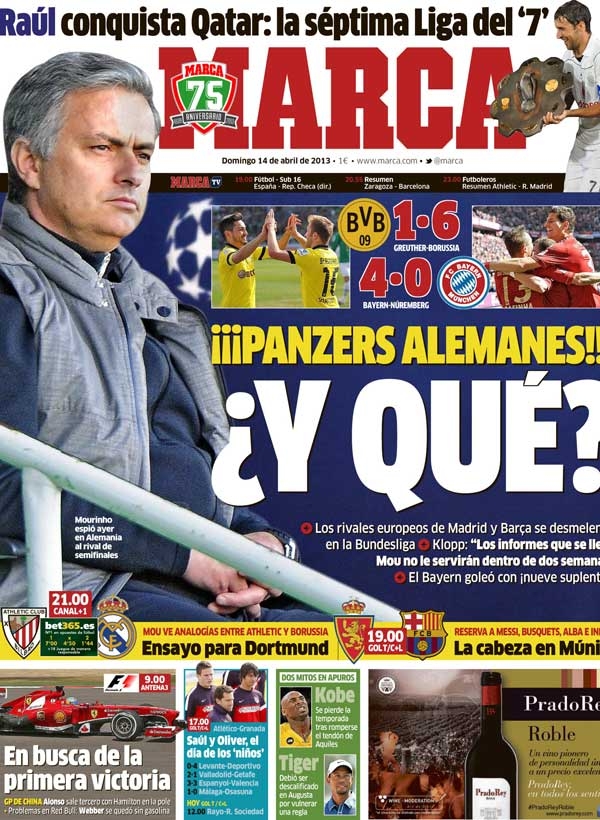 German Panzers and what?

Greuther 1-6 Dortmund
Bayern 4-0 Nuremburg
The rivals of Madrid and Barca send a meesage
Klopp: "The information Mou will have got will notserve him in two weeks"
Bayern put on a goal-blitz with nine substitutes
Mou to find analogies between Athletic and Borussia
Trial for Dortmund
Messi, Busquets, Alba and Iniesta to be rested
Minds on Bayern
Raul conquers Qatar: the seventh for the number 7
Formula 1: In search of their first victory
Alonso in third place behind Hamilton who is on pole
Problems for Red Bull: Webber left without fuel
Atletico v Granada: Saul and Oliver, a day for youth
Two legends in trouble
Kobe to miss the season after breaking his Achilles tendon

Tiger due to be disqualified from Augusta after violating the rules 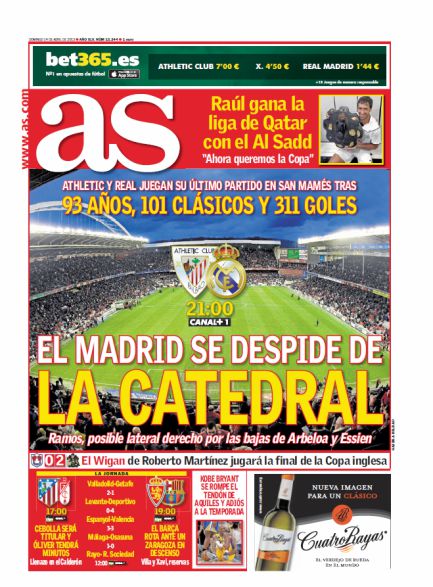 Madrid to say goodbye to the Cathedral

Athletic and Real play their last game in San Mames after 93 years, 101 classics, 311 goals
Ramos to play at right back following injuries to Essien and Arbeloa
Roberto Martinez's Wigan side to play in the final of the FA Cup
Raul wins the Qatar league with Al Sadd
"Now we want the cup", Raul
Atletico v Granada: Cebolla to start and Oliver to be given time
The Calderon to be full
Zaragoza v Barcelona: Barca rotate against Zaragoza
Villa and Xavi amongst the reserves

Kobe Bryant out of the season after breaking his Achilles tendon 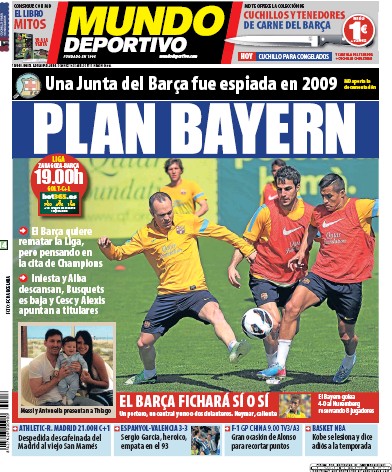 Barca want to comeback in La Liga but they are thinking of their date in the Champions League
Iniesta and Alba to be rested, Busquets out injured and Cesc and Alexis to start
Messi and Antonella present Thiago
Barca to sign yes or yes
A goalkeeper, a central defender and one or two strikers
Neymar
Bayern put on a goal-feast against Nurkeemburg winning 4-0 with 9 bench players
Athletic v Real Madrid: A decaffeinated farewell to San Mames
Formula 1: A great occasion for Alonso to cut the deficit

Basketball: Kobe out of the season with an injury