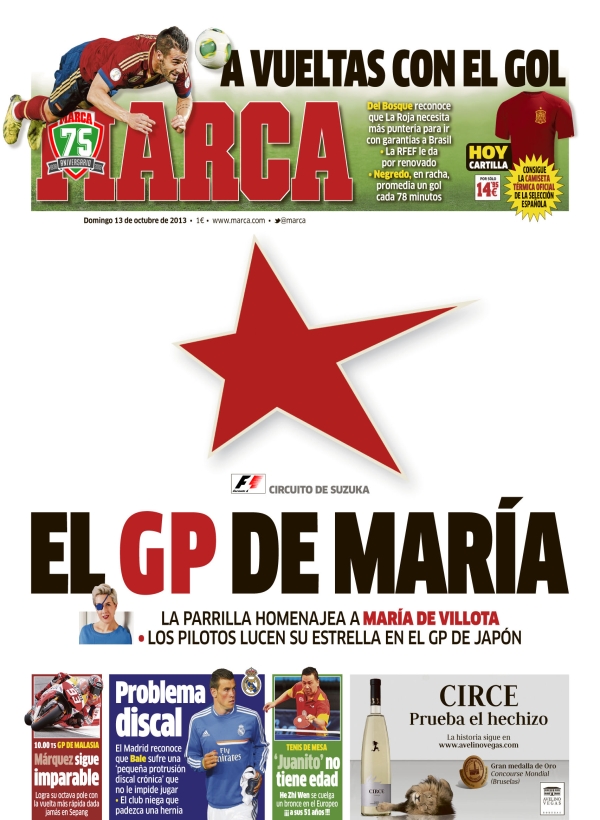 The GP of Maria
A great homage is paid to Maria de Villota
The drivers light up the star at the Japan GP
Taking turns scoring goals
Del Bosque recognises that La Roja need a reliable striker going to Brazil
Negredo is on a good run of form, scoring every 78 minutes
Disc problem
Madrid recognise that Bale has suffered a small cronic disc protrusion that could impede his efforts to play
The club deny that it is a hernia
Marquez is unstoppable still

He wins his eighth pole with a record time in Sepang 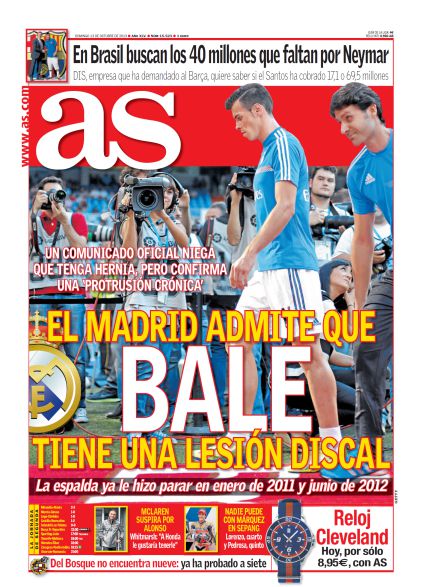 Madrid admit that Bale has a disc injury
The club official communicate that he does not have hernia but rather a cronic protusion
His back has already made him stop playing twice, January 2011 and June 2012
Brazil look for the €40 million that are missing over Neymar
DIS, the company that has demanded the money from Barca, want to know if Santos charged €17.1 million or €69.5 million
Del Bosque still has not found a number 9: Already he has tried 7
McClaren's hope for Alonso: "We would like to have him"

Noboday can stop Marquez in Sepang 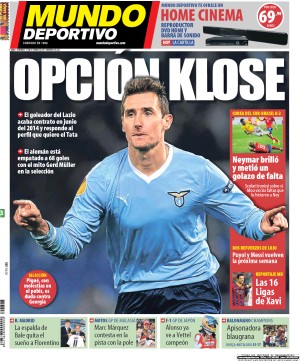 The Klose option
The goal-scorer from Lazio will run out his contract in June 2014 and fits the profile wanted by Tata
The German has scored 68 goals - as many as Gerd Muller's record
Neymar shines and scores a great goal
Puyol and Messi return to training this week
Looking back at the 16 La Liga's of Xavi
Real Madrid: Bale's back is destroying Florentino's dream
Moto GP: Marc Marquez responds with a pole-winning trial
Formula 1 Japan: Alonso already considers Vettel the champion