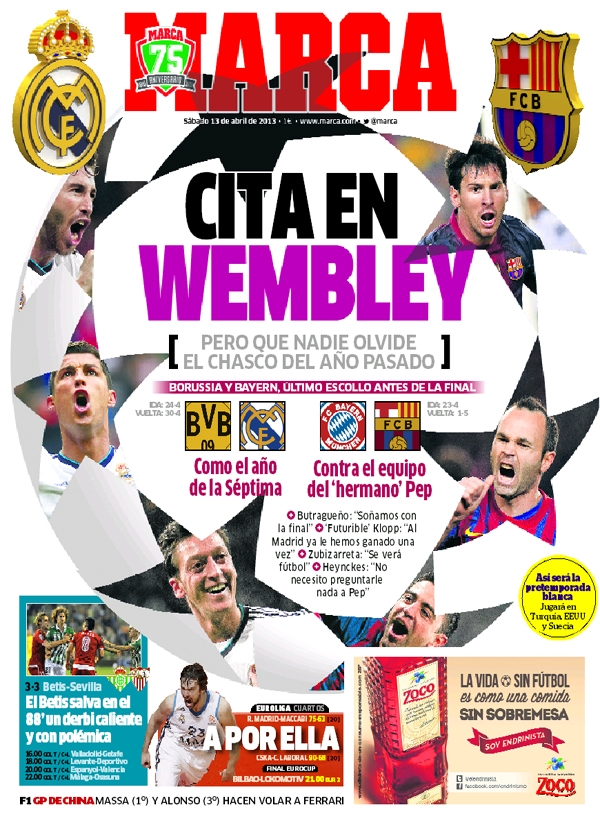 But nobody wants to forget the disappointment of last year
Borussia and Bayern, the last hurdles before the final
Dortmund v Madrid: Against the team of the seventh
Bayern v Barcelona: Against the Pep's new team
Butragueno: "We dream of the final"
Klopp: "With Madrid we have already beaten them once"
Zubizarreta: "It will be good football"
Heynckes: "I do not need to ask Pep nothing"
Preseason for Madrid to take place in Turkey, US and Switzerland
Betis 3-3 Sevilla: Betis salvage a point in the final minutes in a heated and controversial derby

F1 China: Massa first, Alonso third as they make to fly in the Ferrari 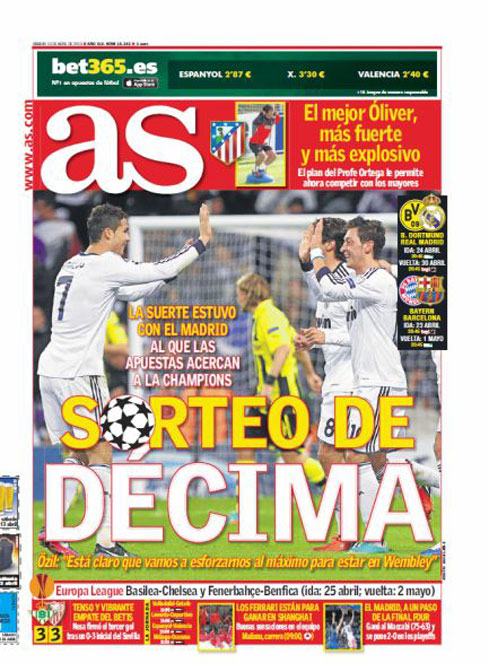 The draw for La Decima

The luck goes with Madrid as their odds of winning increase
Ozil: "It is clear that we will put in a maximim effort to make it to Wembley"
Dortmund v Real Madrid 24 April and 30 April
Bayern v Barcelona: 23 April and 1 May
Europa League: Basil v Chelsea and Fenerbahce v Benfica
Betis 3-3 Sevilla: A tense and vibrant draw in Betis
Nosa seals the third goal after his side were losing 0-3
Ferrari are ready to win Shanghai
A great feeling exists amongst the team
Basketball: Madrid progress to the final four
The best Oliver, stronger and more explosive
The plan of Profe Ortega is to make him more competitive with the senior players 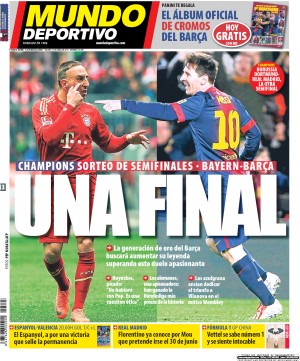 Champions League draw: Bayern v Barca
The golden generation of Barca will look to add to their legend by overcoming a fierce duel
Heynckes: "I will not speak to Pep. It is a question of ethics"
The Germans have steamrolled the Bundesliga this seasons, winning earlier than any other team in history
Los Azulgranas anxious to dedicate a victory in Wembley to Vilanoa
Real Madrid: Florentino already knows the plans of Mourinho
The coach has already told the President that he plans to leave on June 30
Formula 1: Vettel already knows the number 1 and he feels untouchable