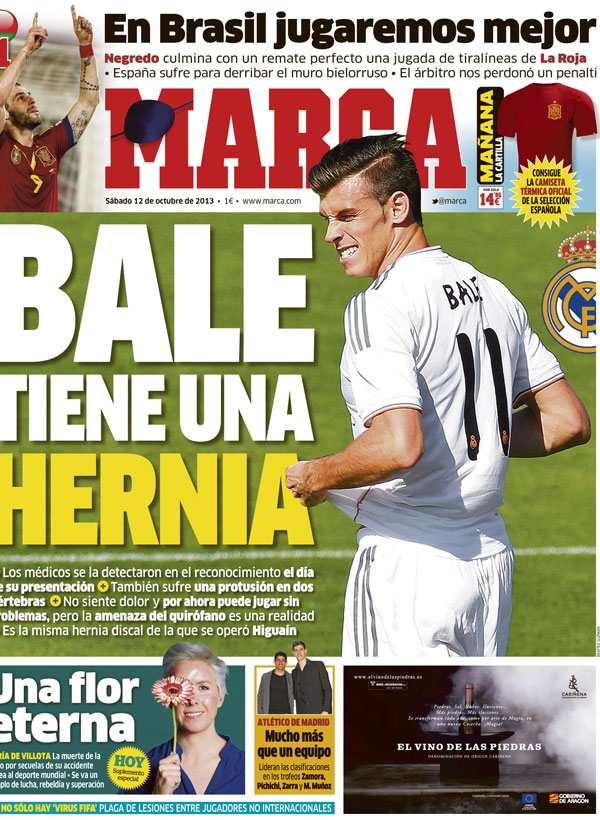 Bale has hernia
The doctors detected it on the day of his presentation
He also has suffered a protrusion in two of his vertebrates
He does not feel pain and for now can play without problems but the threat of  the need of surgery is a real reality
It is the same hernia problem that Higuain was operated for
In Brazil we will play better
Negredo finished with a great strike
Spain suffered against the wall the Belorussians put up
The referee missed a penalty against Spain
An eternal flower
Maria de Villota: The death of the driver came as a result of the accident she had last year
Atletico Madrid: More than a team
They lead the races for the Zamora, the Pichichi, the Zarra and the M.Munoz  trophies
Not only the FIFA virus: The plague of injuries amongst players extends beyond the internationals 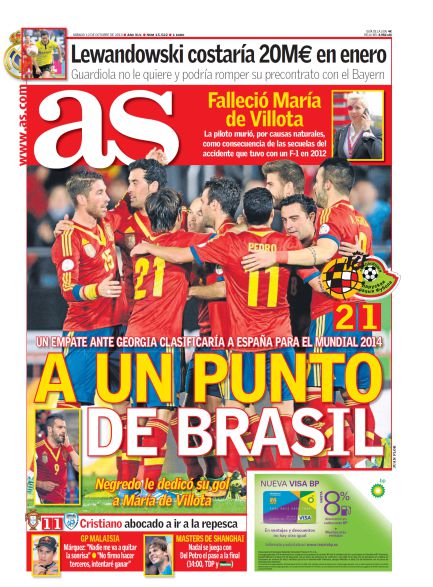 One point away from Brazil
A draw against Georgia would be enough for Spain to qualify for Brazil 2014
Negredo dedicates his goal to Maria de Villota
Cristiano's side heading for the play-offs
Lewandowski would could 20€ million in January
Guardiola does not want him and he could break the pre-contractual agreement with Bayern
GP Malaysia: Marquez, "Nobody will get away from me with a smile"
"I will not settle for third places, I will try and win"
Maria de Villota passes away
The driver died of natural causes that came as a result of the accident she had in 2012
Masters Shanghai: Nadal plays with Del Potro on route to the final 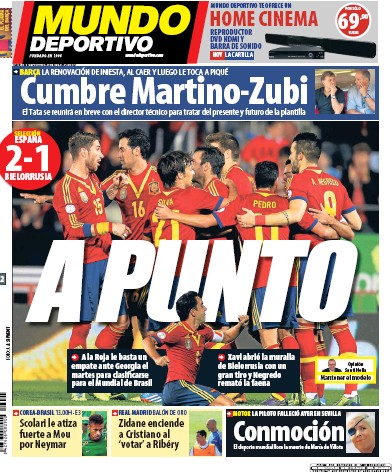 One point
La Roja do enough and now a draw against Georgia on Tuesday will be enough to qualify for Brazil
Xavi unlocked the Belarus wall with a great striker before Negredo completed the task
Martino and Zubi summit
El Tata will meet briefly with the director to try and present a plan for the future
Iniesta renewal close, next Pique
Sth. Korea v Brazil: Scolari hits back at Mou over Neymar
Real Madrid: Zidane aggravates Cristiano saying he would vote for Ribery for Balon d'Or
Emotional: Driver dies yesterday in Sevilla
World sport loses Maria de Villota