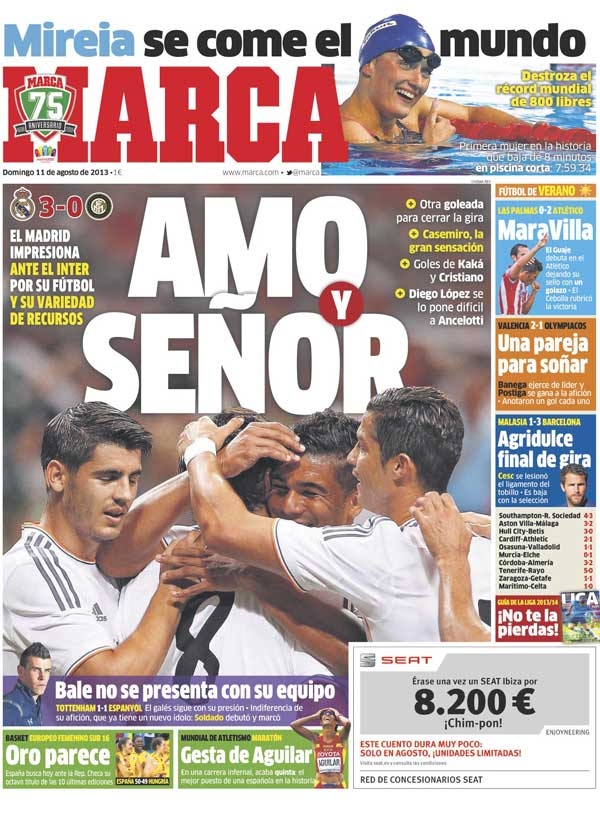 Love and Gentlemen-like
Madrid 3-0 Inter
Madrid impress against Inter with great football and a variety of resources
Another goal-feast to close out the tour
Casemiro had a great game
Goals for Kaka and Cristiano
Diego Lopez makes life difficult for Ancelotti
Bale does not show up with his team
Tottenham 1-1 Espanyol: The Welshman continues his rebellion
His fans are indifferent, they already have a new idol in Solado who debuted with a goal
Summer of football
Las Palmas 0-2 Atletico: MaraVilla
El Guaje scores for Atletico and of his strikes was a golaco
Valencia 2-1 Olympiakos: A dream pairing
Banega shows why he is the new leader and Postiga wins over the fans
Both work tirelessly and scored a goal each
Malaysia 1-3 Barcelona: A bittersweet finale
Cesc goes down with an ankle ligament injury, he is forced out of the Spanish team as a result
Mireia impressing at the world championships
She destroys the 800m freestyle record, she becomes the first woman to get under 8 minutes
European Under 19 Championship: Another gold it seems
Spain search for another gold today
World Athletics, marathon: A great achievement from Aguilar 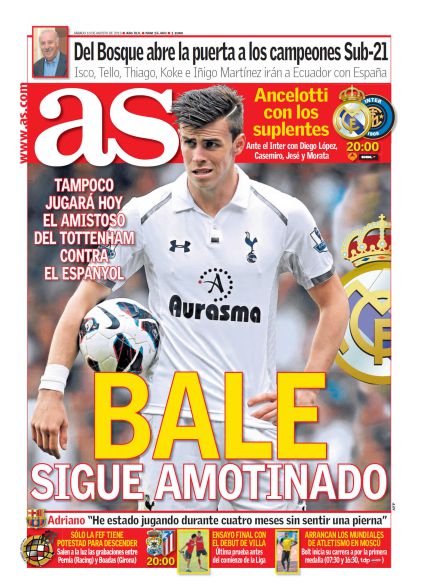 A Madrid of dreams
The team finishes the preseason with a victory
Kaka shines against Inter
Casemiro impresses
Cristiano continues to find the net
Villa debuts with a golazo: El Guaje was very active and played well with his new team, giving Atletico much strength in attack
Bale goes home while Tottenham present its new team to the fans
Mireia beats the world record in the 800m short course
Neymar was the star without Messi
Barca win 3-1 against Malaysia
Usain Bolt: "I am ready"
Today is the final of the 100m 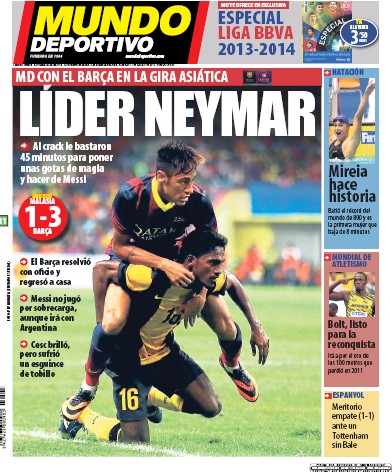 Neymar leads
The Brazilian was enough to put the tie to bed in 45 minutes with some  magical touches to make up for Messi's absence
Barca finish their business and now will return home
Messi did not play because he was rested ahead of his trip to Argentina
Cesc shines but suffers a sprained ankle
Swimming world championships: Mireia makes history
She beats the world record for the 800m women's freestyle recording a time under 8 minutes
World Athletics: Bolt is ready to take over again
He will run for gold today in the 100m he lost in 2011
Tottenham: Bale does not join his team as he continues his rebellion