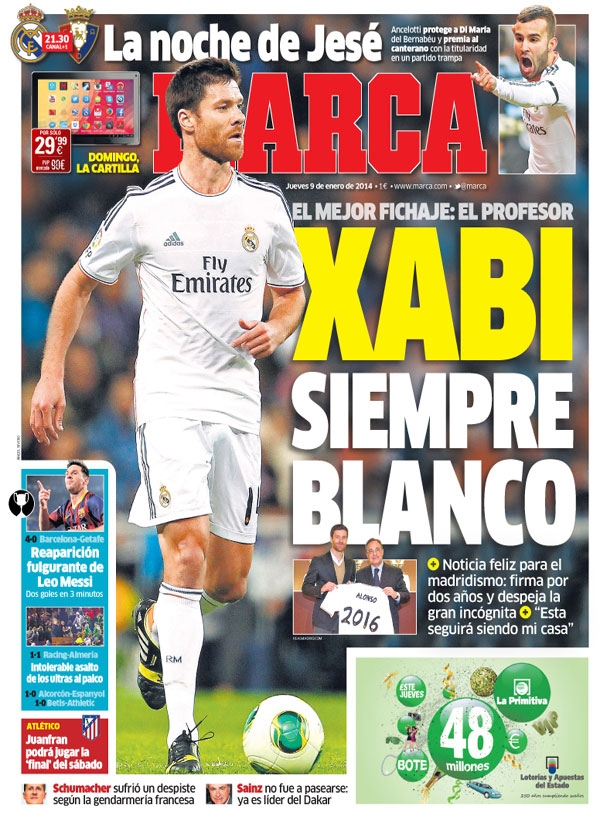 Xabi always a Blanco
The best signing: The Professor
Happy news for Madrid: He signs for two more years and the great unknown is now solved
"This will continue being my home"
Jese's night
Ancelotti protects Di Maria at the Bernabeu and awards the Canterano with a starting place for the tricky test
Stunning reappearance from Leo Messi
Two goals in three minutes
Intolerable attack from the Ultras
Atletico: Juanfran can play the 'final' this Saturday
Schumacher suffers another lapse according to police
Sainz is not taking it easy; he is leading Dakar 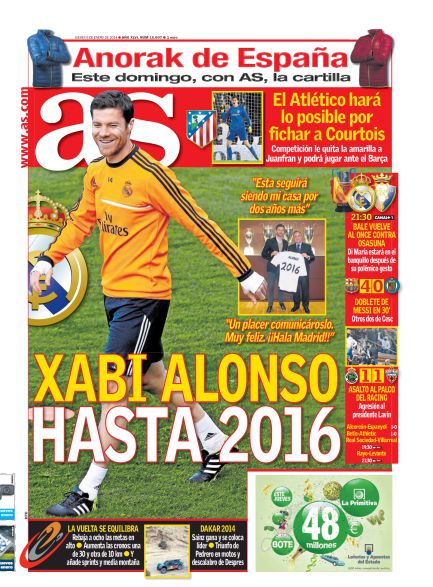 Xabi Alonso until 2016
"It is a pleasure to communicate this, it is happy news. Hala Madrid!," Florentino Perez
"Madrid will continue being my home," Alonso
Bale returns to the first eleven against Osasuna
Di Maria will be on the bench after his controversial gesture
A double for Messi in 30 minutes
Cesc gets two
Attack from the gallery: The aggression aimed at President Lavin
Atletico will make it possible to sign Courtois
Competition Committee rescind Juanfran's yellow card so he can play against Barca
Dakar: Sainz wins and is now the leader
Triumph for Pedrero in the motorbikes and disaster for Despres 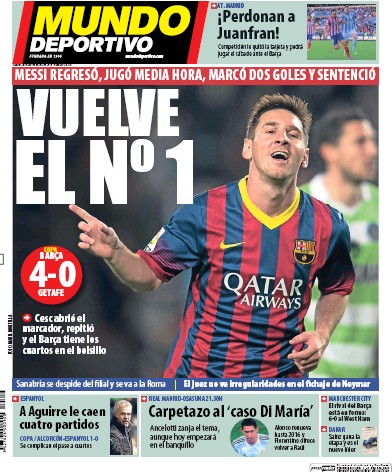 The return of Number 1
Cesc opens the scoring and Barca have progression in the bag
Messi returns, plays half an hour and scores two goals to decide the game
The judge does not see any irregularities with Neymar's signing
Atletico: Juanfran is pardoned
The Competition Committee rescind his caution and now he can play against Barca
Betis bring some cheer
The Di Maria case shelved
Ancelotti drops the issue even though today he starts on the bench
City: Barca's UCL rival beats West Ham 6-0
Dakar: Sainz wins the stage and now leads