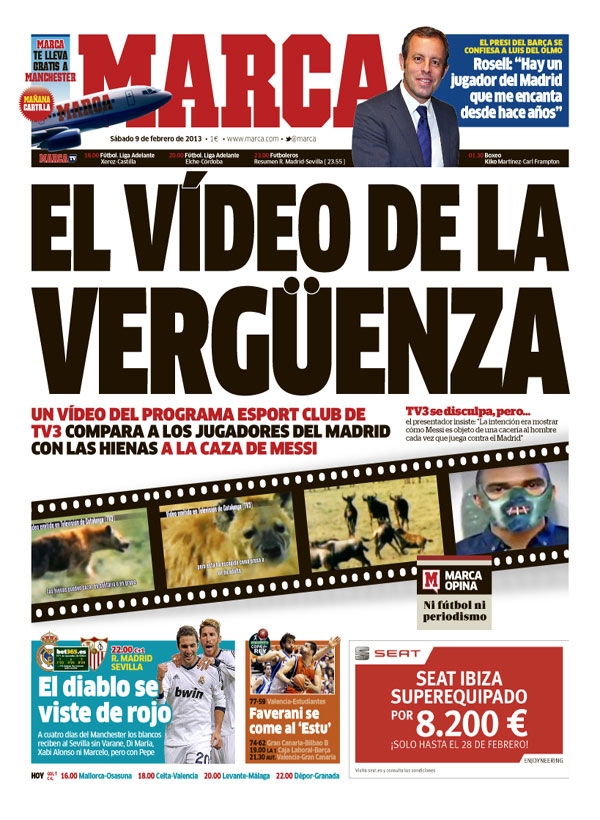 A video of shame A video from the program Esport Club of TV3 compares the players of Madrid with hyenas on the hunt for Messi TV3 is sorry but... the presenter insists it was to show how Messi is the object of a pursuit every time he plays against Madrid Marca's opinion, 'this is not football and this is not journalism' Real Madrid v Sevilla: The devil wears red Los Blancos to play without Varane, Di Maria, Xabi Alonso or Marcelo but with Pepe as they are rested for Manchester in four days time Faverani comes to the 'estu' The president of Barca confesses, "There is one player of Real Madrid that I like for many years" 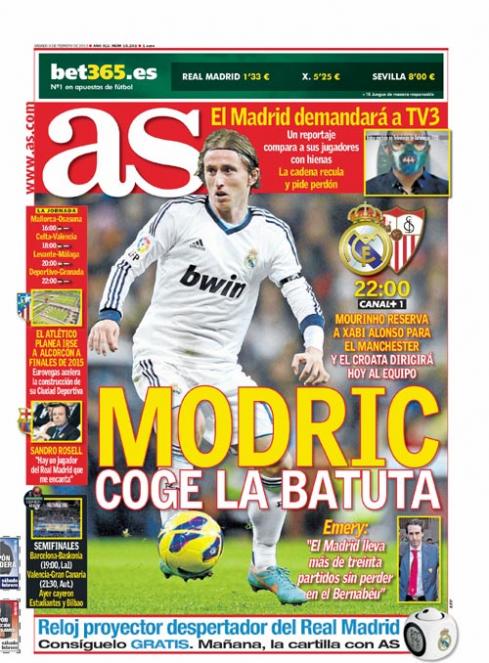 Modric takes the baton
Mourinho to rest Xabi Alonso for Manchester and the Croatian is to take his place in the team today
Emery: "Madrid have gone more than 30 games without losing at the Bernabeu"
Real Madrid to sue TV3 after a report that compared Madrid players to hienas
The station retracts and asks for forgiveness
Atletico plan to go to Alcorcon at the end of 2015
Eurovegas accelerates the construction of their Ciudad Deportivo
Sandro Rosell: "There is one player at Real Madrid that I like" 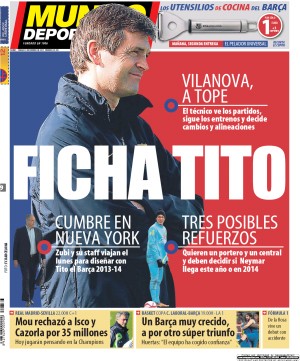 Tito date
Vilanova, from the top
The coach watches the games, continues the trainings and decides the changes and lineups
Summit in New York
Zubizarreta and his staff travel on Monday to start plans for the Barca of 2013-14
Three possible reinforcements: They want a goalkeeper, a midfielder and they should decide if Neymar comes this year or in 2014
Mourinho reject the idea of signing Isco and Cazorla for €35 million
Today they will play thinking of the Champions League
Barca have risen very high to another super triumph
Huertas: "This team has a lot of confidence"
Formula 1: De la Rosa debuts with an accident