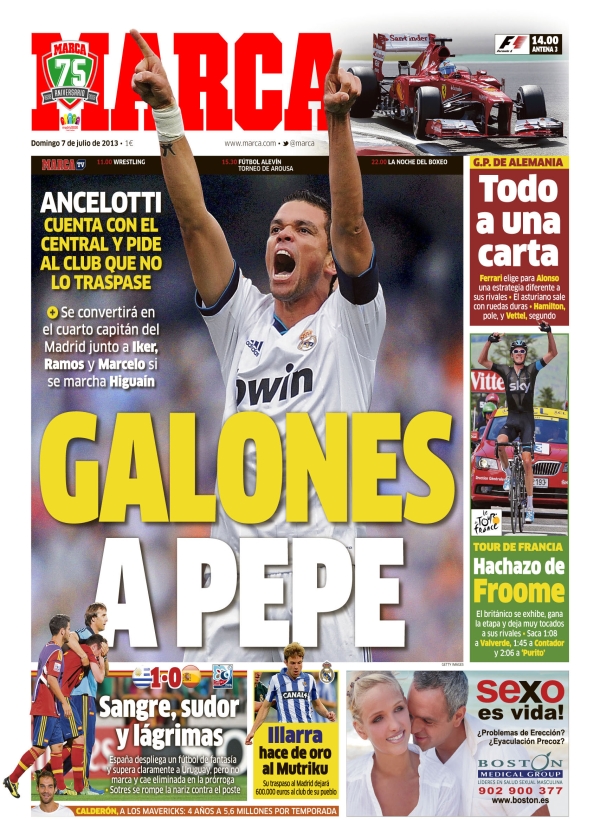 Keen to keep Pepe
Ancelotti is counting on the Portuguese and asks the club not to let him go
He will become the fourth captain of the side, together with Iker, Ramos and Marcelo if Higuain leaves
Uruguay 1-0 Spain: Blood, sweat and tears
Spain play great football and dominate Uruguay but could not score and fall in extra time
Sotres broke his nose against the post
Illarra: Takes gold back to his local club of Mutriku
His transfer to Madrid will bring €600,000 to the club
Calderon transfer to the Mavericks: 4 years and 5.6€ million every season
All the eggs in one basket: Ferrari gives Alonso a different strategy
The Asturian will start from a tough position
Hamilton in pole and Vettel in second
The Tour: A great show from Froome
The British puts on an exhibition and wins the stage to leave his rivals in his wake 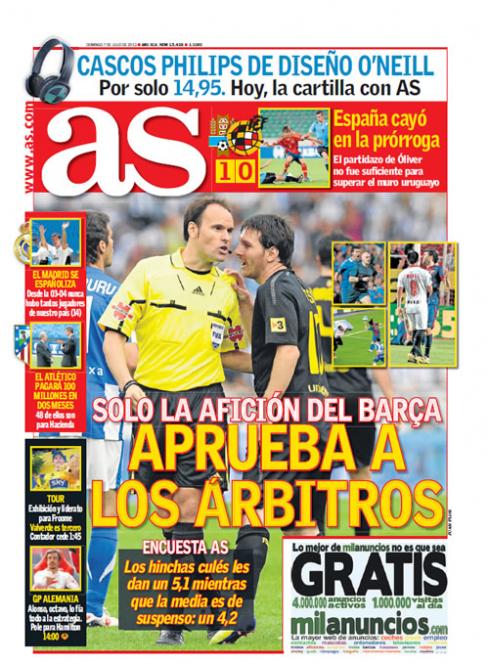 Only Barca fans approve of the referees
AS Survey: Cule fans give a total score of 5.1 while the average is 4.2
Spain fall in extra time
A great game from Oliver was not enough to break the Uruguay wall
The 'Hispanicization' of Madrid
Not since 2003-04 has there been so many Spanish players at Madrid (14)
Atletico will pay 100€ million in two months, 48€ of which will go to the tax office
The Tour: Froome leads from the front with an exhibition
Valverde third, Contador 1.45 behind
German F1: Alonso, eighth, has faith in his strategy
Hamilton in pole 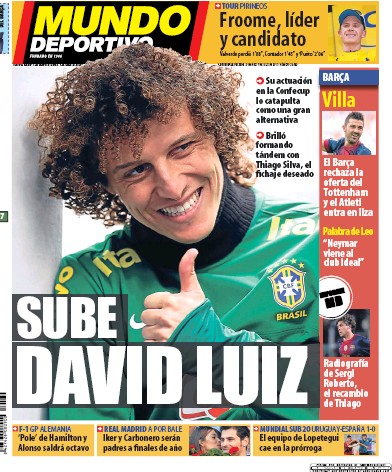 David Luiz edges close
His recent showing at the Confederations Cup has catapulted him into a great alternative
He shined in tandem with Thiago Silva, the signing most desired
Barca reject an offer from Tottenham for Villa as Atleti enter the race
Leo Messi: "Barca is ideal for Neymar"
Sergi Roberto the replacement for Thiago Alcantara
German F1: Pole for Hamilton as Alonso starts in eighth
Real Madrid going for Bale
Iker and Carbonero will be parents by the end of the year
Under 20 world cup: Uruguay 1-0 Spain
Lopetegui's team fall in extra time
The Tour: Froome, leader and contender
Valverde loses 1.08, Contador 1.45 and Purito 2.06