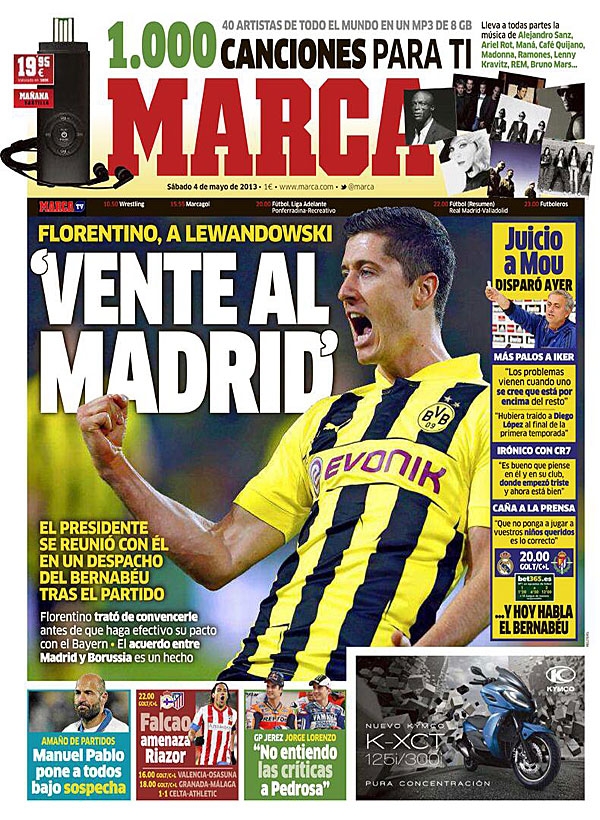 "Come to Madrid," Perez
The President met with him in an office after the game in the Bernabeu
Florentino tried to convince him before to make a pact with Bayern
The agreement between Madrid and Borussia is done
Mourinho on trial, has a go at the media yesterday
More criticisms of Iker
"The problems came when on player thought he was above the rest"
"I would have brought Diego Lopez to the club earlier in the season"
Ironic about CR7
"He is great n
ow that he and the club are now happy together after being sad with the club earlier"
One for the media
"How I did not play your dear youth players was the correct decisions"
and today he talks at the Bernabeu
Fixed games
Manuel Pablo puts everything under suspicion
Riazor under the Falcao threat
GP Jerez: Jorge Lorenzo

"I do not understand the criticisms of Pedrosa" 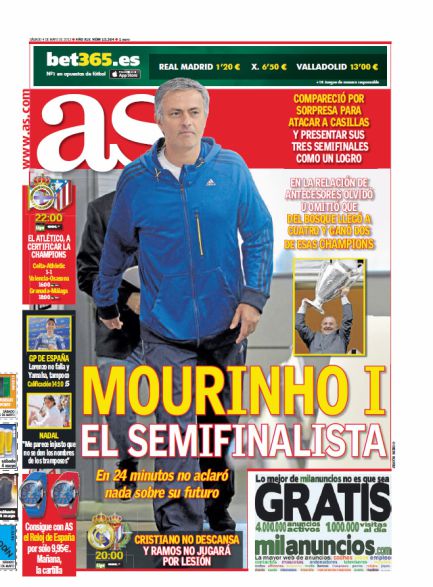 The semifinalista
In 24 minutes he clarifies nothing about his future
In relation to his predecessors, he leaves out Del Bosque who made four semifinals and won twice
Again attacks Casillas and presents his three semfinals as an achievement
Atletico out to secure Champions League football
GP Spain
Lorenzo does not fail and neither does Yamaha
Nadal
It seems injust to not give the names of those who cheat
Cristiano to play, Ramos will not play tonight 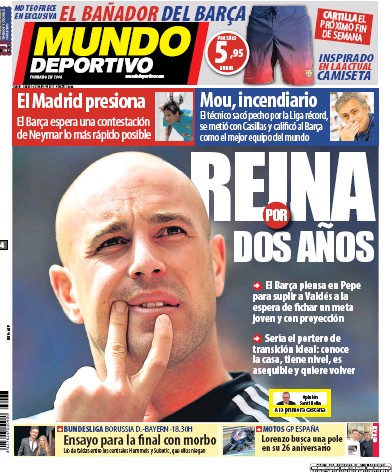 Barca think of Pepe to replace Valdes and hope to sign a young player with more of a future
He would be the ideal coach: he knows the club, has the level, is affordable and wants to return
Bundesliga: Trial that heats up the final for the UCL
An affair between Hummels and Subotic, that they deny
Moto GP Spain: Lorenzo searches for pole to celebrate his 26th birthday
Madrid pressure
Barca hope for a response from Neymar
Mou incensed
The coach puffs out his chest boasting of his La Liga record, criticis Casillas and claims Barcelona are the best team in the world