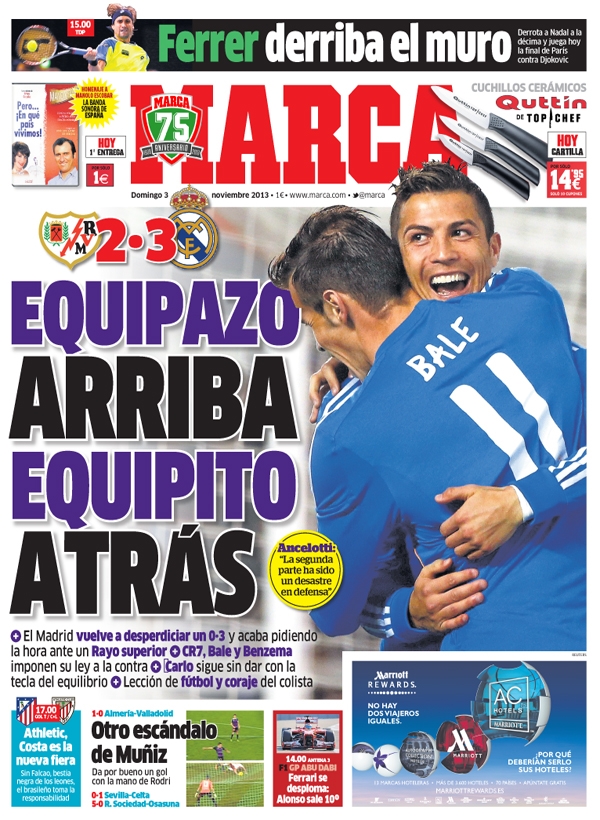 A great Madrid go up, a weak Madrid barely hold on
Madrid again wasted a 3-0 lead and allowed Rayo to dominated the last half hour
CR7, Bale and Benzema worked the counter-attack well
Carlo continues to play with the team's balance
It was a lesson in football and courage from the hosts
Another Muniz scandal
He awards a goal to Almeria's Rodri despite a handball
Athletic, the wild beast Costa threatens again
Without Falcao, the black beast
GP Abu Dhabi: Ferrari collapse, Alonso in tenth

Ferrer overcomes the wall: He beats Nadal at the tenth attempt to set up final with Djokovic in Paris today 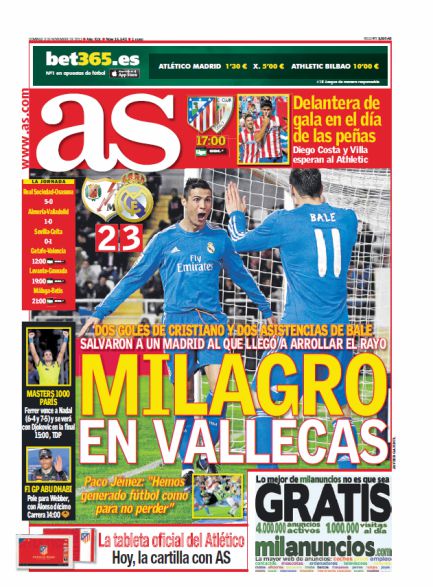 Miracle in Vallecas
Two goals from Cristiano and two assists from Bale save a Madrid side that after impressing early on laid down against Rayo
Paco Jemez: "We have played the type of football worthy of not losing"
Leading the way in the game of the day
Diego Costa and Villa await Athletic
Masters 1000 Paris: Ferrar beats Nadal and will play Djokovic in the final
F1 GP Abu Dhabi: Pole for Webber, Alonso tenth 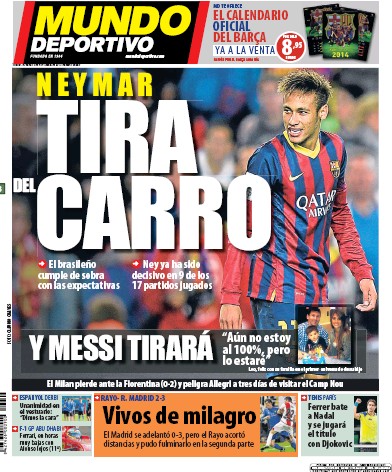 Neymar carrying the burden
The Brazilian coming out of the shadows of expectation
Neymar has been decisive in 9 of his 17 games played
and Messi will return too.."Even if I am not 100 per cent, I will be soon"
Milan lose against Fiorentina and Allegri under fire now with three days before his team's visit to Camp Nou
Miracle kept alive
Madrid went ahead 0- but Rayo cut their lead and could have equalised in the second period

Tennis: Ferrer beats Nadal and will play for the title against Djokovic