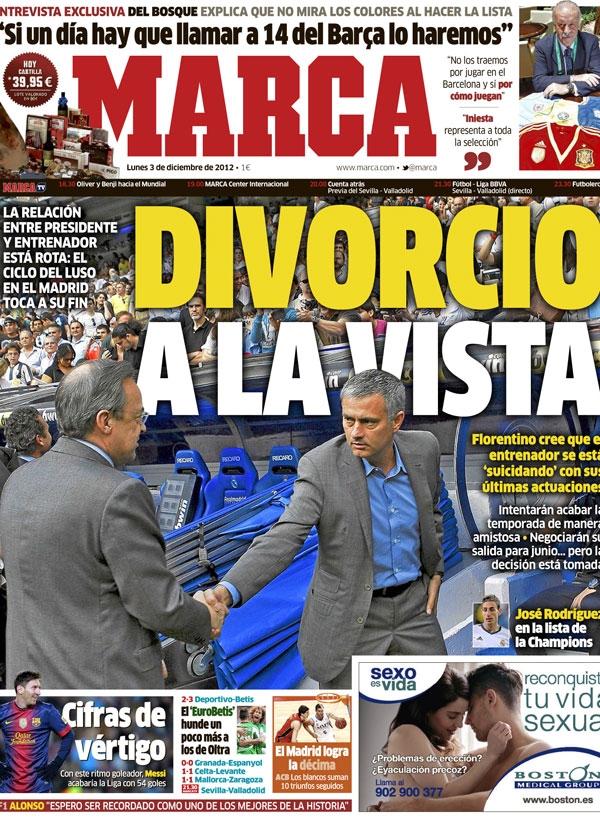 Divorce in sight between Mourinho and Real Madrid

The relation between the President and the coach is broken

Florentino thinks Mourinho has been committing suicide with his recent actions

They will negotiate Mourinho’s exit this June

But the decision has been made

Exclusive interview with Del Bosque: he says that he does not look at the colours before selecting his teams

“If one day I must call 14 Barca players, I will”, Del Bosque

“We don’t taken them because they play for Barcelona, but, rather how they play”, Del Bosque

Dizzy numbers : At his current rate of goals, Messi will score 54 La Liga goals this season

Basketball: Madrid to make it ten in a row 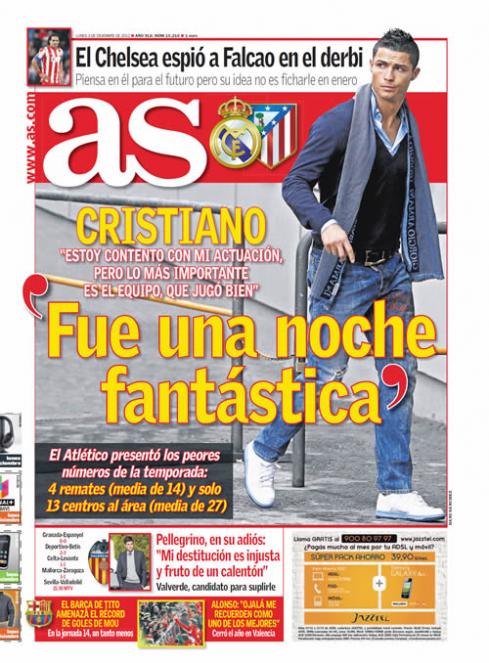 Cristiano: I am content with my performance, but, it is more important for the team that I play well”

“It was a fantastic night”, Ronaldo

Atletico with their worst numbers of the season : four shots (average is 14) and only 13 balls into the area (average is 27)

Pellegrino and his goodbye: My firing was unjust and the decision was made in the heat of the moment

Valverde is a candidate to take over from the Argentine

Alonso: Got permitting that they remember me and how I am one of the best

Chelsea spy on Falcao in the derby: they are thinking for the future but the idea is not to sign in January 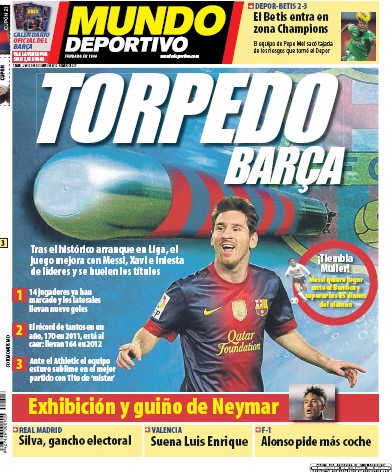 After making history, the game gets better with Messi, Iniesta and Xavi leading the way as Barcelona start to smell more titles are on the way

14 players have already scored for Barcelona, with the fullbacks claiming nine in total

Against Athletic the team was sublime in the best game so far under Tito, the Mister

Muller trembles: Messi wants to play against Benfica and break his record of 85 goals in a calendar year

Exhibition and the wink of approval for Neymar

F1: Alonso asks for more from his car

Betis in the Champions League places: The team of Pepe Mel took risks as they took out Deportivo