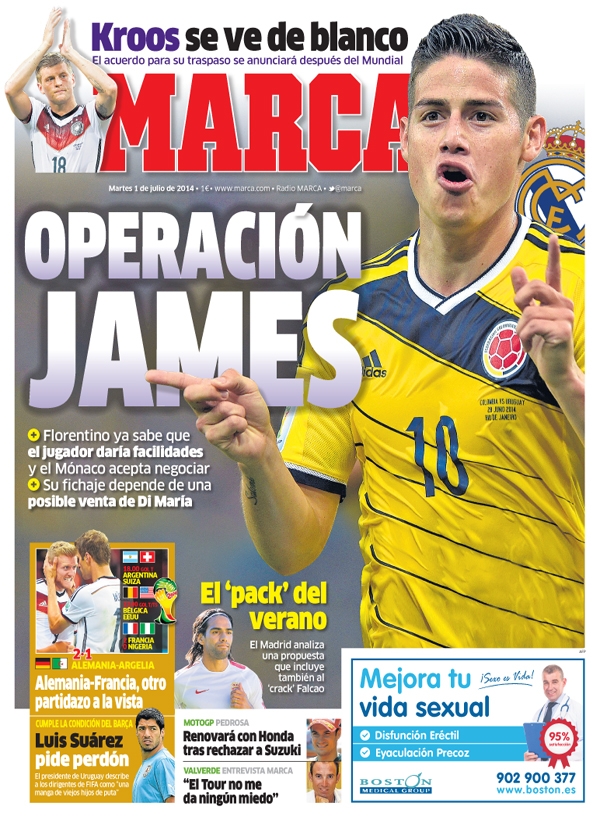 Operation James
Florentino already knows that the player would ease the deal through and Monaco accept
negotiations.
His signing depends on the possible sale of Di Maria.
Kroos is a white. The agreement over his transfer will be announced after the World Cup.
The summer pack. Madrid analyse a proposal that includes the star Falcao too.
Germany France, another great game ahead.
Luis Suarez says sorry. He complies with Barca's request. The president of Uruguay describes FIFA's
leaders as 'a bunch of old m***********s' 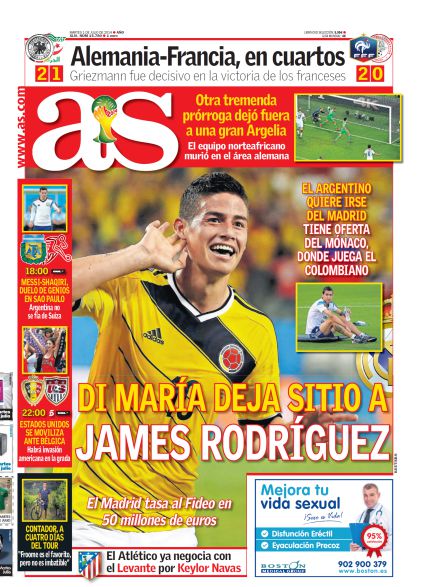 Di Maria leaves room for James Rodriguez.
The argentine wants to leave Madrid, He has an offer from Monaco where the Colombian plays.
Madrid value the 'beanpole' at 50 million Euros.
Atletico negotiate with Levante for Keylor Navas
Germany France in the quarters. Griezmann was decisive in the French victory.
Another tremendous extra time leaves a great Algeria team out. The north African side died in the
German area.
Messi Shaqiri, a battle of geniuses in Sao Paolo. Argentina wary of Switzerland.
United States deploy ahead of Belgium. There will be an American invasion in the stands. 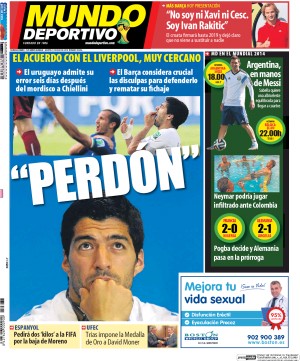 Sorry. The agreement with Liverpool is very close.
The Uruguayan admits his error six days after biting Chiellini.
Barca consider his apology crucial to defend him and lower the price of his signing.
Kroos in pole position to replace Illarramendi.
I'm not Xavi or Cesc. I'm Ivan Rakitic. The Croatian signs until 2019 and makes it clear that he will not
replace anyone.
Argentina in the hands of Messi. Sabella wants a balanced Albiceleste to progress to the quarters.
Neymar could play through injury against Colombia.
Pogba the matchwinner and Germany progress after extra time.