With it coming up to five years since Malaga’s historic Champions League run, Alex Brotherton retells the story of how the Andalusians ambushed Europe’s elite…

Football is a cruel game, especially when Champions League progression is at stake. Such teams, devastated at falling just short of glory, are left to rue missed chances, controversial refereeing decisions and costly mistakes. If one casts their mind back through the annuls of European Cup history, they’ll eventually come across Malaga’s Champions League quarter-final against Borussia Dortmund in 2013. Out of shot, during BVB’s jubilant celebrations, were scenes of utter despair and dejection. The victim of football’s cruelty that night were the Andalusians, despite the odds being stacked heavily against them at the start of the competition.

That last-eight appearance was the highlight of two very successful seasons for Malaga. Los Boquerones, under the guidance of former Manchester City and Real Madrid boss Manuel Pellegrini, secured an unexpected, fourth place in the 2011-12 season, their best-ever finish in the top flight. That ensured qualification for the following Champions League campaign, in which the debutants’ performance surprised everyone and left them only minutes away from the semi-finals. Those two years represented a huge over-achievement for a side who have yo-yoed between the first and second tiers in Spain and aren’t even the biggest team in Andalusía.

The foundations for their European adventure were laid over two seasons. Pellegrini was brought in halfway through the 10-11 campaign to save a struggling Malaga from the threat of Segunda football, and he did just that. After having secured an 11th-place finish and their Liga status, the Coach was entrusted with new owner Abdullah Al Thani’s transfer kitty, with the goal of pushing for Europe come May. Allowed to revamp the team and implement his pass-happy brand of football, Pellegrini would not disappoint the Malaga faithful.

The summer arrivals of Isco, Nacho Monreal and €23m man Santi Cazorla in the summer of 2011 signalled the dawn of a new era for the Andalusians. No longer were they going to settle for mid-table finishes and derby-day defeats to the likes of Sevilla and Granada. They wanted to play with the big boys.

Malaga’s 11-12 campaign was more a marathon rather than a sprint. After a slow start, including heavy home defeats to Barcelona and Real Madrid, the southerners went on an unbeaten home run from October 30 onwards. The run included wins against the likes of Villarreal, Valencia and Sevilla, as well as a 0-0 draw with Atletico Madrid. Although disappointing away form and a winless December threatened to derail their quest for European qualification, a superb home record of 13 wins, three draws and just as many losses propelled Malaga to fourth place by matchday 30. Salomon Rondon’s 11 League strikes, along with Cazorla and Isco’s direct involvement in 15 and 10 of the side’s goals respectively, ultimately ensured Malaga clinched a Champions League playoff berth for the first time in their history.

It was some achievement, given the financial disparity that unfortunately still exists in La Liga. Financial difficulties have stricken the club for much of the last two centuries due to careless spending and the League’s inequality, and like many of Spain’s clubs, Malaga are only able to survive off the scraps left behind by the powerhouse trio of Real Madrid, Barcelona and Atletico. 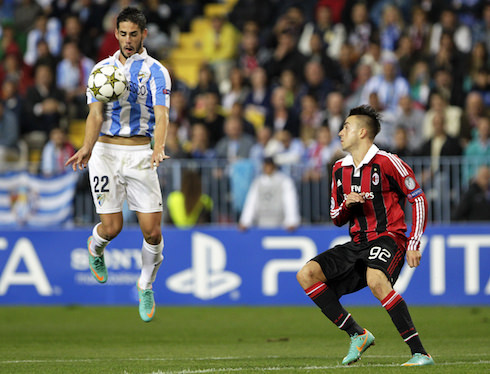 The 12-13 campaign also marked Los Boquerones’ maiden voyage in Europe, and it started well for them. Despite losing the likes of Cazorla and Monreal to Arsenal, plus Rondon to Rubin Kazan, Malaga were able to make some shrewd moves of their own. Although no money left the Albicelestes’ modest transfer kitty that summer, veteran strikers Javier Saviola and Roque Santa Cruz were brought in on free transfers to provide much-needed European experience. In addition, solid defensive acquisitions were made through the loan arrivals of Diego Lugano and Vitorino Antunes, while the free transfer of defensive midfielder Manuel Iturra helped to bolster the back line.

On the pitch, things were going well too. Malaga eased through a potentially-tricky. two-legged Champions League playoff agaomst Panathinaikos with a 2-0 aggregate victory, sealing a place in Group C alongside Zenit St Petersburg, Anderlecht and Milan. Every year, the Champions League draw gives us groups that defy the predictions of professional analysts by throwing up surprises at every turn, and Group C was one of them. The Rossoneri, being seven-time European champions, were favourites to progress automatically, with the Russians – winners of the UEFA Cup in 2008 – fancied for second.

But Malaga surprised everyone, carrying their domestic form from the previous season into Europe and finishing top of the group, four points ahead of Milan in second. The potent attack, which had served Malaga so well during the term before, flourished on Europe’s biggest stage after 3-0 and 1-0 home wins against Zenit and Milan respectively, either side of a resounding 3-0 victory in Belgium, gave Malaga a perfect start to the first phase with maximum points, seven goals scored and none conceded. Given the self-confessed. attack-leaning approach of Coach Pellegrini, three straight clean sheets were impressive.

Los Boquerones’ free-scoring ways continued into the second round of group games, although their defensive resilience faded somewhat. Draws with Milan and Zenit respectively, followed by a similar result against bottom club Anderlecht gave Malaga 12 points from a possible 18 after they opened with three straight wins. Despite no victories in those three European games, the Spaniards nonetheless finished the group stage unbeaten and in pole position. Their reward was a winnable last-16 tie with Porto.

The first leg in Porto didn’t go to plan. Malaga’s performance was just as horrendous as the lime green kit they wore that night, the Spaniards surrendering the majority of possession to their hosts, while mustering only one shot on target. Nevertheless, Pellegrini’s men escaped relatively unscathed, taking a 1-0 deficit back with them to southern Spain. Four weeks later, the second leg would prove to be one of the greatest nights in Malaga’s history...

Your responses will be moderated, and sometimes edited, by Football Espana before appearing on the site. Your data may be made public and you accept our Privacy Policy. Please keep your comments clean and try to keep them relevant to the blog above. We reserve the right to reject views that we deem unsuitable for publication.
FOOTBALL ESPANA LATEST BLOGS
LATEST BLOGS FROM GUEST BLOGGER
CLUB BY CLUB NEWS