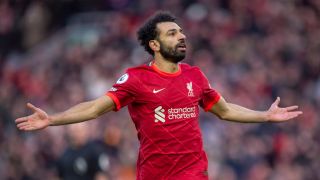 Mohamed Salah has claimed he’s the best player in the world.

The Egyptian will lead the line for Liverpool when they face Real Madrid in the final of the Champions League in Paris on May 28th.

“If you compare me with any player in my position, not only in my team but in the world, you will find that I am the best,” he said in comments to beIN Sports carried by Goal.

Salah, 29, has indeed enjoyed a superb season. He’s contributed 30 goals and 16 assists in a Liverpool side that still has a chance of winning all four trophies available to them this season.

Karim Benzema will be in the Madrid team Salah faces and he can legitimately contest the Egyptian’s claim to be the best in the world. Benzema has contributed 44 goals and 15 assists this season and has already won La Liga and the Supercopa de Espana this season. He’s living a unique moment in his career.

But Salah is out for revenge against Madrid. He was part of the Liverpool team that lost to Los Blancos in the 2018 Champions League final in Kyiv and was injured by Sergio Ramos during the game, effectively ruining his World Cup in Russia with Egypt.

Mohamed Salah thinks he's the best in the world 👀 pic.twitter.com/7F8RC2gOrn