Kylian Mbappe is in Madrid with Achraf Hakimi.

That’s according to Cope, who report that the Paris Saint-Germain striker ate in a famous restaurant in the Spanish capital with his club teammate on Monday afternoon.

Mbappe and Hakimi made the reservation for 14:00 but didn’t arrive until 15:25. They were accompanied by two other people as well as Hakimi’s brother and won’t have to report back to training with PSG until Wednesday. The squad has time off.

Neymar Junior has chosen to spend his rest days in Barcelona while Lionel Messi is on a mini-break in Saudi Arabia with Leandro Paredes. Mbappe’s choice of Madrid for his vacation – obviously the home of his chief suitors Real Madrid – raised eyebrows.

Mbappe’s contract with PSG expires at the end of this season and while the French club want him to renew and stay in Paris there’s also serious interest from the Santiago Bernabeu.

Mbappe then spent Monday evening having dinner with Hakimi and two other PSG teammates in Sergio Ramos and Keylor Navas.

It’s understood that he’ll return to Paris on Tuesday. 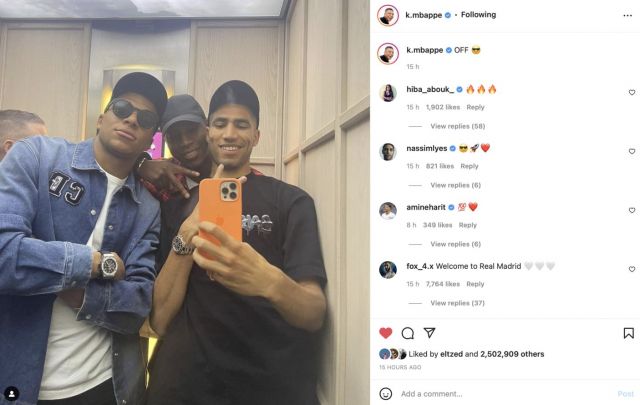