Fati has endured an injury wrecked 16 months with persistent knee and hamstring problems for the Spanish international.

However, following a carefully monitored recovery programme after Xavi’s arrival, Fati made his first La Liga appearance since November with a late cameo in their 2-1 win over Mallorca.

A sight for sore eyes! 😍

Ansu Fati is back on the pitch for Barcelona for the first time since November 🔵🔴 pic.twitter.com/ZTFs8PT6eI

“I am very happy with him. He’s made an effort to be ready for the final stretch of the season”, as per reports from Marca.

“He makes a difference, he’s special, but we must take care of him.”

Fati’s return to full fitness could have a key impact on Barcelona’s summer transfer business with the 19-year-old offering a potential option as world class goal scorer.

If Fati can realise his potential, Xavi has an ideal candidate to spearhead his front line for a decade in Catalonia, and he is confident the teenager can recapture his old form.

“I’ve tested him out as a No.9, because I think he has to play in the penalty area. 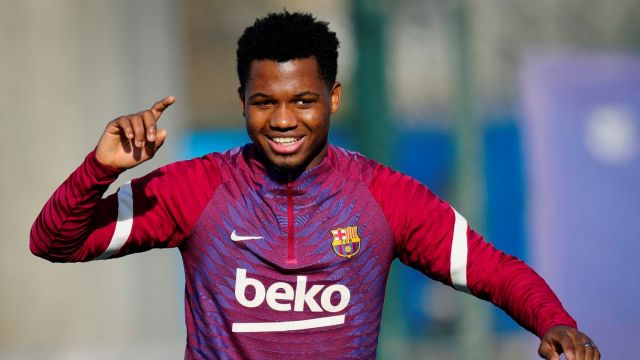 “He’s a special player, who scores goals. They hit him accidentally and go in.

“I see him more as a No.9, than a winger. He doesn’t have the pace or physical ability back yet, but he’s happy.”

Barcelona go to Top Four rivals Real Betis next weekend, as they aim to wrap up a Champions League spot, before ending the campaign with matches against Celta Vigo, Getafe and Villarreal.