It’s an important game for La Blaugrana given they want to go all the way and win the competition. They’ve so far beaten Napoli and Galatasaray to make it to the quarter-final stage.

And they’re in fine form. They’re currently sitting second in La Liga having recorded back-to-back victories over their great rivals Real Madrid and Sevilla, who were then in second place.

Eintracht are currently sitting ninth in the Bundesliga table.

Xavi Hernandez is expected to set his team up in a 4-3-3 shape.

That’s according to Diario Sport, who assure that Marc-Andre ter Stegen will start in goal behind a back four of Ronald Araujo, Gerard Pique, Eric Garcia and Jordi Alba.

Sergio Busquets will anchor the midfield with Gavi and Pedri either side of him while Pierre-Emerick Aubameyang will lead the line flanked by Adama Traore and Ferran Torres. 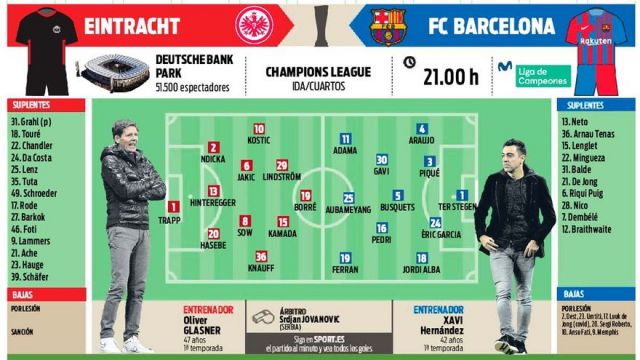