Barcelona boss Xavi hailed the leadership running through his squad as they clinched a late 1-0 La Liga win over Sevilla.

La Blaugrana have moved up to second place in the table this weekend as Pedri’s incredible late goal snatched a crucial three points in Catalonia.

The Sevilla defence left scrambling as the youngster bided his time before smashing Barca in front 🔵🔴 pic.twitter.com/OfTA56YxI4

Xavi was delighted with the resolve of his players at full time at the Camp Nou with the former La Roja schemer stating their league title chances are not over yet.

“We won against a direct rival in a ‘game of six points’ tonight,” as per reports from Diario AS.

“We are in our best moment of the season and we have to take advantage of it.

“Yesterday they (Real Madrid) got three points and for us today was a final. We will continue to fight for the title until the maths tells us no.

“There are many types of leadership.

“We have great captains in Pique, Busquets and Alba, also in Ter Stegen, and Pedri who is a leader on the pitch. 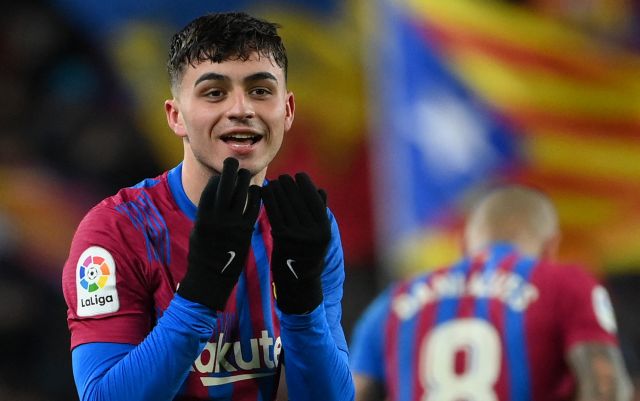 “The leadership Pedri has on the field is extraordinary.”

Pedri’s late intervention turned the game in Barcelona’s favour late on as the 19-year-old continued his incredible rise to a world class midfielder.

Xavi is a huge admirer of the Spanish international and he reserved special praise for the teenager once again in his post match interview.

“I already said he is a superlative player. He always makes a differences.

“He doesn’t surprise me. He can play perfectly with both feet. He is a player that has no comparison.”

Up next for Xavi’s charges is a midweek trip to Eintracht Frankfurt in Europa League action before returning to domestic matters against Levante next weekend.