Ousmane Dembele is proving a valuable member of Xavi Hernandez’s Barcelona squad but it’s still not known what he’s going to do about his future. His contract at Camp Nou expires at the end of this season after five seasons at the Catalan club.

All signs so far have pointed to the idea that the Frenchman is going to leave the club at the end of this season when it does, although a moment caught by Mundo Deportivo has inspired hope amongst many Barcelona supporters that a positive resolution could instead be found.

It occurred in the training session prior to this afternoon’s Europa League clash between Barcelona and Galatasaray. Joan Laporta approached Dembele and gave him a warm hug; a significant moment given the reported tension between the winger and the Catalan club’s president.

Time will tell as to whether this warmth is translated in Dembele committing at least his short-term future to Barcelona, but it certainly represents a positive step in their relationship. One thing for sure is that the acquisition of Pierre-Emerick Aubameyang during the January transfer window has helped the club’s cause. 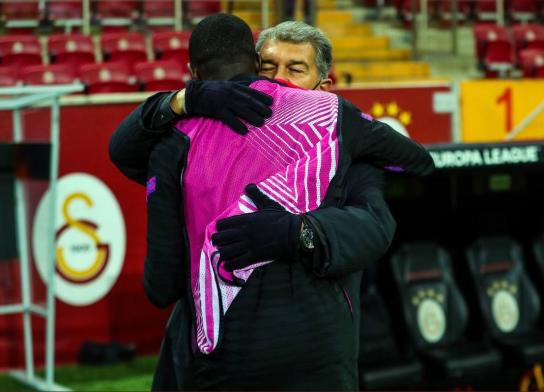