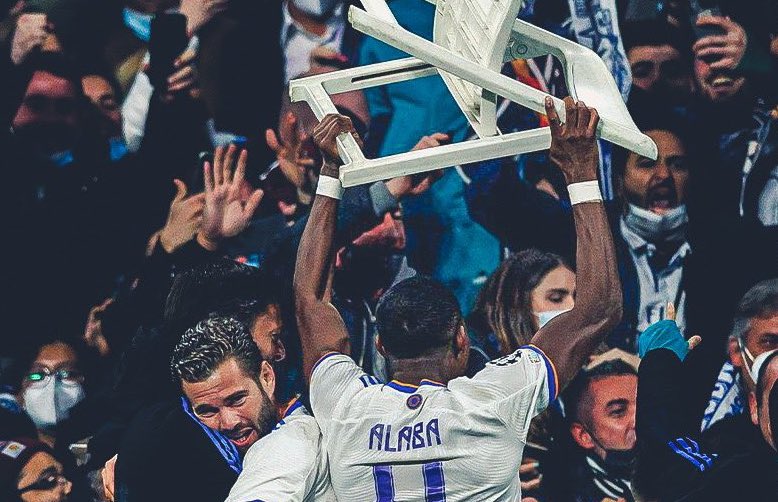 Real Madrid player David Alaba has spoken to German outlet Sport1 about their comeback against Paris Saint-Germain, which Marca then carried on their website.

Los Blancos were up against it after being dominated in the first leg, but few believed they would be able to turn it around once Kylian Mbappe had opened the scoring at the Santiago Bernabeu. Alaba explained that this was far from the case within the dressing room.

“Since the first leg in Paris we believed in that we would get to the quarter-finals the entire time and, of course, we are very happy to have achieved that.”

“Even after the first goal we remained calm and kept pressing. In my first season at Madrid I didn’t want to go out in the Round of 16.”

The infamous phrase that ’90 minutes at the Bernabeu are very long’ was a common motif before the match and Alaba was asked about it afterwards.

“We knew the match would be different at the Bernabeu and that our fans and the atmosphere would be a decisive factor. The atmosphere at the stadium was very special. I knew from my previous visits to the Bernabeu that it can develop its own special power. That was the case against PSG. The fans never left us alone on the pitch, they were vocal the whole match and we were able to repay them. It was a magical night.”

Of course, Alaba’s contribution to the result was large, but he went viral online for his celebration – lofting a chair into the night sky after Karim Benzema scored his third. Sport1 asked what exactly he was up to.

“It’s good to try new celebrations every now and then. And the chair was there at just the right moment. I didn’t think about it, it was just the emotion of it all.”

“After such a spectacular comeback, you can go crazy,” smiled the Austrian star.