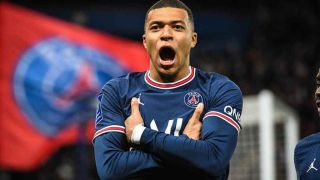 Watch: Mbappe leaves Real Madrid for dead in first half at Bernabeu

As he was in the first leg, Kylian Mbappe has lived up to his billing as star of the show in the first half of the return tie.

Real Madrid faced up to PSG in the first period looking to take control of the match and impose themselves on PSG.

To varying levels of success, they did manage to manoeuvre half-chances by finding Karim Benzema’s head from deep crosses.

Yet not without conceding similar, if not greater, levels of danger. PSG mixed in spells of possession to their game which helped stem any Real Madrid threat.

But the decisive action of the half came through a razor-sharp counter attack, with Neymar releasing Mbappe over the top of Eder Militao first time. David Alaba was unable to cover Mbappe as he whipped the ball past Thibaut Courtois at his near post.

"Look at his body shape, he does the keeper!"

The pace to attack the space followed by the coolest of finishes to put PSG ahead at the Bernabeu!#UCL pic.twitter.com/5LeGrWhnlF

NEYMAR TO MBAPPE. COUNT IT. 🌟 pic.twitter.com/g0OLIRpA6O

MBAPPE GIVES PSG THE LEAD AT THE BERNABEU 🔥 pic.twitter.com/UhcHrQ9qam

That was not the first time either – earlier in the half VAR had ruled out Mbappe’s first effort, after Nuno Mendes was adjudged offside in the build-up.

Real Madrid have 45 minutes to write another surreal chapter in their Champions League history, but must find a way to minimise Mbappe in order to do so.