Real Madrid welcome Paris Saint-Germain to the Santiago Bernabeu tomorrow evening in a titanic Champions League date. A place in the quarter-final of Europe’s premier competition is at stake and PSG have a slight advantage courtesy of their 1-0 victory in the first leg back at the Parc des Princes.

Kylian Mbappe was the decisive man on that night, scoring a dramatic winner in stoppage time to hand his team a lead. He’s a doubt for tomorrow’s game due to an injury he sustained during training on Monday, while Madrid are sweating on the fitness of midfield metronome Toni Kroos ahead of the game.

Both sides are top of their respective leagues by considerable distance. Madrid are eight points clear of Sevilla in La Liga while PSG are 13 ahead of Nice in Ligue 1. Madrid are coming into the game in winning form; they beat Real Sociedad 4-1 on Saturday. PSG aren’t; they lost 1-0 to Nice the very same evening.

Carlo Ancelotti is going to set his team up in a 4-3-3 formation according to Diario AS, with Thibaut Courtois starting in goal behind a back four of Dani Carvajal, Eder Militao, Nacho and David Alaba. Toni Kroos or Eduardo Camavinga will anchor the midfield depending on the fitness of the former while Luka Modric and Fede Valverde will run the engine room. Karim Benzema, flanked by Vinicius Junior and Marco Asensio, will lead the line. 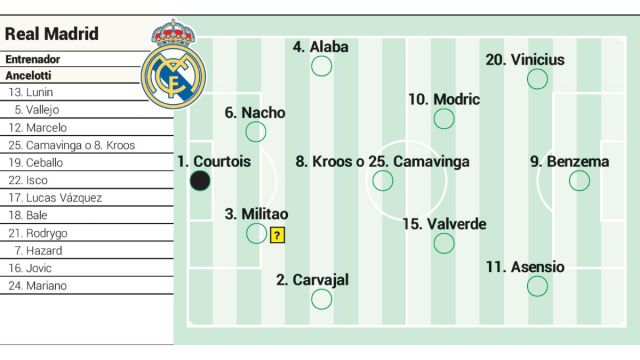