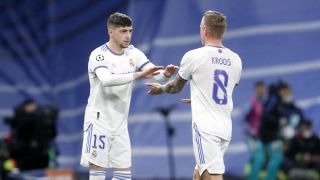 Real Madrid have been handed a boost ahead of their Champions League tie with PSG.

According Diario AS, Fede Valverde trained with the group today and completed the session without any issues. Madridistas were on high alert when he missed Real Madrid’s match against Real Sociedad on Saturday evening, although it has transpired that Valverde was suffering from a cold rather than a muscular problem.

Midfield is the problem area for Real Madrid against PSG, after they suffered in the Parc des Princes. Despite having their Champions League winning trio of Toni Kroos, Casemiro and Luka Modric present, they were unable to get a foothold against Leo Messi and Marco Verratti.

Valverde’s good performance the following weekend against Rayo Vallecano was encouraging for Los Blancos, as Casemiro will be out suspended for the match.

More worryingly, Kroos did not train with the group after a thigh injury picked up during the week, although Ancelotti maintains he will make the PSG fixture on Wednesday. Marcelo was the only other player missing.

One way or another, it seems likely Valverde or Eduardo Camavinga will start in place of Casemiro. Valverde probably has more credit in the bank, but Camavinga impressed against La Real, scoring a brilliant long-range effort.