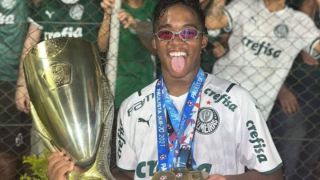 Endrick is one of the hottest names in football. The 15-year-old Brazilian plays for Palmeiras but has been linked with every club in the European elite including Barcelona and Real Madrid. He’s also exploded as a commercial titan according to Diario AS.

The teenager has just become the face of a chain of dental clinics in Brazil, the Odonto Company. He’s signed a three-year deal that runs to 2025. The company also sponsors Rayssa Leal, the Brazilian figure skater who won silver at the Tokyo Olympics.

Endrick is receiving a swell of media interest at a very young age, something that also happened to Neymar Junior and Vinicius Junior. Both ended up leaving Brazil for Spain; the former left Santos for Barcelona while the latter left Flamengo for Madrid.

Endrick is currently on vacation in Europe and has already visited both the Camp Nou and the Santiago Bernabeu. He also attended Madrid’s Champions League last 16 defeat to Paris Saint-Germain.