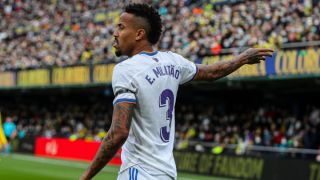 Eder Militao’s life has changed dramatically in a year. He’s stepped up to become a starting centre-back for Real Madrid and has proven himself to be one of the best defenders in Europe.

The 24-year-old has ensured Madrid haven’t missed former captain Sergio Ramos and sights have been set on ensuring he commits his long-term future to the Santiago Bernabeu. He wants to renew with Madrid and Madrid are keen for him to renew.

The Brazilian’s current deal expires in 2025 and no formal negotiations have taken place as things stand. Madrid signed him from Porto for €50m in the summer of 2019 and he’s currently earning in the region of €3.5m net per season.

That was generous at the time it was agreed but is not in line with his current reality. And also pushing the renewal is the fact that Militao’s fine form has attracted the attention of Europe’s elite, with Chelsea emerging as the most dangerous contender according to a report in Marca. They’re planning a move.

But Militao is content in the Spanish capital and has no intention of pressing for a move as things stand. He’s happy at the Santiago Bernabeu and loves working with Carlo Ancelotti.