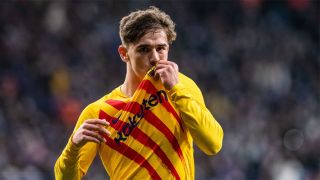 Barcelona midfielder Gavi wasn’t alive the last time the club competed in the Europa League as per Marca. It wasn’t even called the Europa League back then but the UEFA Cup. Barcelona were eliminated from it by Celtic in the 2003/04 season.

The now-17-year-old was born five months after Barcelona’s clash with Celtic, in August 2004. Gavi’s coach Xavi Hernandez, however, was in the team that lost to the Scottish outfit.

And the Andalusian teenager has already well and truly gained the trust of Xavi. He started Barcelona’s last two games, against Atletico Madrid and Espanyol, scoring in both games although his goal in the Catalan Derby was ruled out due to a marginal offside.

Gavi only broke into the first team at Camp Nou at the start of this season but has already made 27 appearances. He’s also earned himself international recognition, becoming a key part of Luis Enrique’s Spanish national team.