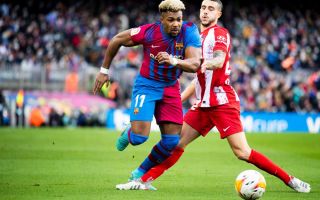 Barcelona welcome Napoli to Camp Nou this evening in the first straight knockout round of the Europa League. It’s an intriguing clash between two of Europe’s most historic football clubs, one that could very well be in the Champions League.

But it isn’t. Barcelona dropped down to the Europa League after they failed to get out of their Champions League group, finishing third behind Bayern Munich and Benfica.

Napoli, usually a Champions League participant, competed in Europe’s second-tier competition from the jump this season. They finished second in their group behind Spartak Moscow.

Barcelona are currently fourth in La Liga, level on points with fifth-placed Atletico Madrid and a point ahead of sixth-placed Real Sociedad. Real Betis, Sevilla and Real Madrid are ahead of them.

Napoli are third in Serie A, a point behind Internazionale and two behind league leaders Milan. Juventus are in fourth, seven points behind the club synonymous with the south of Italy.

Xavi Hernandez is expected to set up in a 4-3-3 formation with Marc-Andre ter Stegen starting in goal behind a back four of Sergino Dest, Eric Garcia, Gerard Pique and Jordi Alba.

Frenkie de Jong will anchor the midfield with Nico Gonzalez and Pedri either side of him, while Pierre-Emerick Aubameyang could make his first start flanked by Adama Traore and Gavi.

Luciano Spalletti is expected to set up in a 4-2-3-1 with Alex Meret in goal behind a back four of Giovanni di Lorenzo, Amir Rrahmani, Kalidou Koulibaly and Mario Rui.

Andre-Frank Zambo Anguissa and Fabian Ruiz will sit in the double pivot with an attacking trident of Elif Elmas, Piotr Zielinski and Lorenzo Insigne operating behind lead man Victor Osimhen.