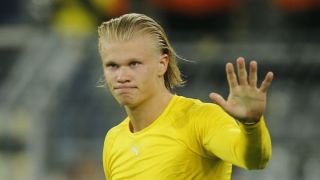 Real Madrid want Erling Haaland but he isn’t their priority

Real Madrid want to sign Erling Haaland from Borussia Dortmund this summer transfer window but he isn’t their priority according to a report by Diario AS. That would be Paris Saint-Germain marksman Kylian Mbappe, who Madrid are determined to sign.

But there won’t be any movement from Madrid on Mbappe until after they face PSG in the last 16 of the Champions League, the second leg of which will take place in Spain on March ninth.

Only after the deal for Mbappe is sealed will Madrid begin their pursuit of Haaland in earnest. But they might have been pipped to his signature by then as they’re not the only interested party.

Manchester City, Bayern Munich and Barcelona are all thought to be seriously interested in signing the Norwegian goalscorer and, in the case of Barcelona at least, he’s their priority. Everything hinges on the player’s will. If he’s determined to play at the Santiago Bernabeu he’ll have to bide his time.