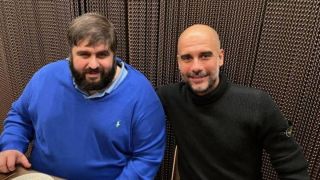 As Ronald Araujo’s contract negotiation with Barcelona continues rumours about the Uruguayan centre-back’s future are beginning to grow louder according to Diario Sport.

Araujo’s contract with Barcelona will expire in the summer of 2023 and his agent, Edmundo Kabchi, was pictured enjoying a dinner with Manchester City coach Pep Guardiola.

City have long been linked with a move for Araujo, but this photo has set the powers-that-be at Barcelona on red alert.

Araujo is currently one of the lowest-paid members of the first team and believes he should be on the same level as Ferran Torres, Pedri and Ansu Fati, which would be about €6m per year.

Araujo is valued at €35m by Transfermarkt and has already managed to earn seven caps for the Uruguayan national team. He joined Barcelona from Boston River in 2018.

Since breaking into Barcelona’s first team last season he’s gone on to make 63 appearances for the club.