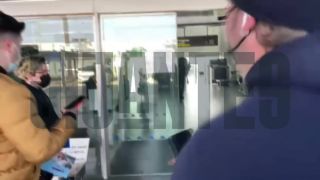 Pierre-Emerick Aubameyang has been filmed arriving at Barcelona’s El Prat airport on Monday ahead of completing his transfer from Arsenal as captured by Gerard Romero.

The Gabonese centre-forward will join Barcelona on loan until the end of the season if both parties can complete the deal. It’s understood that Barcelona need to move on deadwood first in order to free up space on their wage bill, however.

Barcelona are keen to bring in a goalscorer after Ansu Fati suffered another injury setback and was ruled out for several months. And Aubameyang is most certainly a goalscorer.

The 32-year-old has contributed 30 goals in 72 caps for the Gabonese national team and has hit 92 in 163 appearances for Arsenal. With Borussia Dortmund, the club where he enjoyed his best football, he scored 141 in 213 appearances.

Barcelona will hope that his arrival can fire them back into the Champions League places. They’re currently a point shy of Atletico Madrid and fourth place and their next fixture is against Los Rojiblancos at Camp Nou this coming Sunday afternoon.